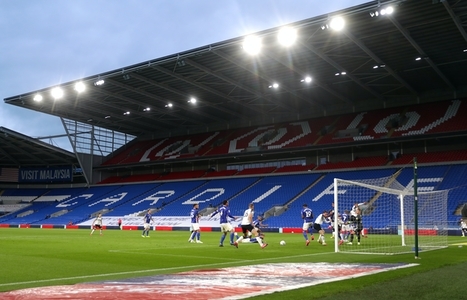 Neil Harris will be forced into making at least two chnages for tonight's game against Birmingham City. Kieffer Moore is ruled out for possibly 5 weeks with a hamstring injury while Joe Ralls is suspended after a red card in the South Wales derby on the weekend.

"He's (Moore) been in great form for us," said Cardiff manager Neil Harris.

"He's had a scan and he has got a tear in his hamstring and will be out until the New Year. We know he is going to be missing for the next five fixtures.

"It's very unlikely he will be available for Rotherham [2 January]. If he is, brilliant but, if he's not, we're looking at the FA Cup [third round at Nottingham Forest on 9 January], followed by Norwich at home on 16 January.

"The league is the priority this season. If we can get him back before then, fantastic, if not, hopefully at home to Norwich.

"He has been pivotal to the four-game winning run we had [before losing to Swansea].

"But it becomes an opportunity for somebody else, like Robert Glatzel, who has been waiting in the wings and he has made an impact off the bench in recent weeks."