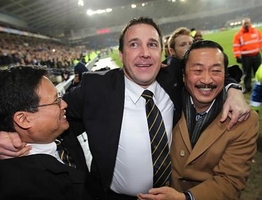 Mackay has been sweating on the fitness of defender Hudson, who missed the Carling Cup semi-final victory over Crystal Palace and the 1-1 draw with Southampton with a calf strain, but the Bluebirds captain could make his return to the matchday squad this weekend.

However, Hudson will have to displace one of Ben Turner and Anthony Gerrard, both of whom have been excellent in his continued absence.

Full-back Kevin McNaughton is likely to keep his place in defence after starting ahead of Darcy Blake against the Saints in midweek, while strikers Joe Mason and Rudy Gestede are both aiming for recalls.

A victory for Cardiff could take the Welsh outfit top of the npower Championship table, if results elsewhere go in their favour.

Blackpool manager Ian Holloway has an embarrassment of attacking riches.

Quicksilver trio Matt Phillips, Tom Ince and Lomana LuaLua have all impressed in recent weeks although Holloway turned to the substitutes' bench as his free-flowing forward line struggled to make headway against Coventry in midweek.

Roman Bednar - making his debut after joining the Seasiders on loan from West Brom - laid on the equaliser for fellow sub Kevin Phillips before the more robust talents of Gary Taylor-Fletcher secured a 2-1 win, presenting the manager with a selection headache.

Liverpool loanee Danny Wilson and Neal Eardley could both feature in defence as centre-back Ian Evatt serves the first game of a two-match suspension for collecting 10 bookings.

Midfielder Keith Southern remains a doubt with a gashed ankle.