What could be a pivotal game in the battle for Premier League Survival. Cardiff start the day 8 points ahead of bottom placed Huddersfield. 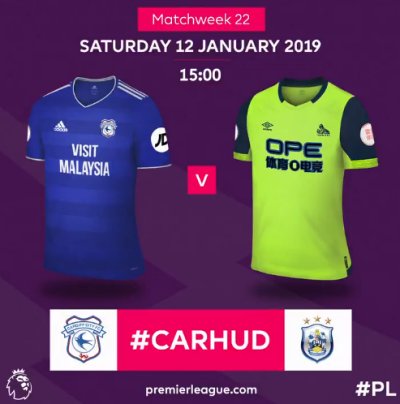 Cardiff boss Neil Warnock will give late fitness tests to key midfielders Victor Camarasa and Harry Arter, who picked up slight knocks over the festive period.

Huddersfield forward Jason Puncheon is expected to make his Premier League debut for the club.

Puncheon, on loan from Crystal Palace, started in last week's FA Cup defeat at Bristol City after joining until the end of the season.

Defender Christopher Schindler returns to contention after serving a one-game ban and Wagner is expected to recall Jonas Lossl in place of Ben Hamer in goal. Aaron Mooy, Danny Williams (both knee), Abdelhamid Sabiri (collarbone) and Tommy Smith are all still out.