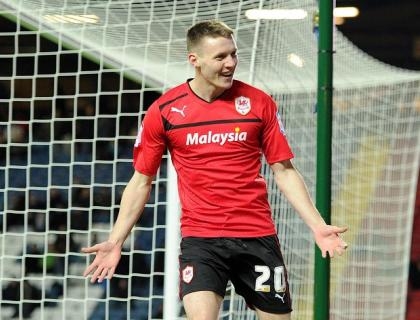 Playmaker Peter Whittingham, left-back Andrew Taylor and former QPR attacker Tommy Smith are all available for the visit of the Tractor Boys.

There were concerns that Whittingham could be missing for up to four weeks after he picked up a knee injury in the Millwall victory but he will return as the Bluebirds look to cement their seven-point lead at the top of the npower Championship.

Taylor missed their victory against Birmingham through illness and is ready to come back into the side while Smith came through 40 minutes of a behind-closed-doors friendly with Exeter in midweek having been sidelined since October with a hamstring injury.

Manager Malky Mackay is looking to add one or two players to his squad but will be without former West Ham striker Nicky Maynard for the rest of the season.

The 24-year-old loanee missed the FA Cup third round defeat at Aston Villa with an ankle injury and could be sidelined for a further two weeks. Scott Loach is set to continue in goal as Town aim to become only the second team to avoid defeat in the Welsh capital.

Mick McCarthy is boosted by the news that midfielder Andy Drury has recovered from the virus that saw him miss the club's last two games while Bradley Orr is expected to return at right-back after being cup-tied at the weekend.

McCarthy could hand a debut to Frank Nouble, who signed from Wolves for an undisclosed fee this week, while fellow strikers David McGoldrick and Aaron Mclean are hoping for full debuts after appearing as substitutes against Villa.