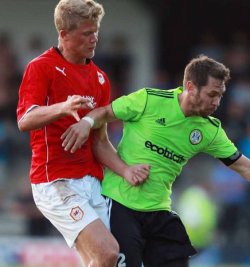 The Dane has been sidelined for 10 weeks since suffering the injury in the Capital One Cup tie against Accrington, but he featured for the under-21s last week and is available to face the league champions.

Peter Odemwingie has been passed fit after returning from international duty with Nigeria, with Aron Gunnarsson also in the squad after Iceland's World Cup play-off defeat to Croatia.

Boss Malky Mackay has hailed Ryan Giggs as his favourite player of the past 15 years as the Welshman prepares to face his hometown club for the first time.

Giggs, who turns 40 next week, has never faced Cardiff during his illustrious 22-year career at Manchester United, and the Bluebirds will become his 117th different opponents as a Red Devils player should he take the field.

Player-coach Giggs, who won 64 caps for his country, was born in the Welsh capital, and Mackay admits it will be special to see the veteran make his return.

"Every day of the week, every week of the year for the last 15 years he has been a top player," said Mackay.

"He is a top bloke and he is probably my favourite player of the last 15 years.

"I met him a couple of weeks ago at the FA Pro Licence course I was talking at, and he is now stepping into the other side of the game in that player-coach role I had at one point and a lot of players have had at some point when their careers are finishing.

"But I think you look at how he has conducted himself professionally through his whole career and he just looks a model pro.

"The way he has kept his body and how his game changed when his pace went, and his thought process in terms of how to play.

"Even the way he started to adapt his body through using yoga to allow him to play into his 40s, he has been an absolute star and he is obviously an iconic figure here for what he has done for Wales and I have no doubt at one point he will end up in management.

"He has learned from the best (Sir Alex Ferguson) and it will be good to see him on Sunday."

United manager David Moyes must decide whether Nemanja Vidic will be fit enough to skipper his team.

Vidic needed hospital treatment after suffering concussion against Arsenal immediately prior to the international break, but has now returned to training.

Michael Carrick (Achilles) and Phil Jones (groin) are definitely out, while Robin van Persie missed Holland's recent matches with a long-standing toe problem and Marouane Fellaini has a wrist complaint that will eventually require surgery.

Victory would push United back among the title contenders after a difficult start to the season, in which they lost three of their opening six fixtures and collected just seven points.

Moyes insisted he never considered his side to be out of the race.

However, even after the win over Arsenal a fortnight ago, he has not allowed himself to get carried away either.

"The previous manager had difficult starts and I am the same," he said.

"Maybe this level of media, 20 years on from Sir Alex is much greater and more intense. A slow start can happen to anybody. But at Manchester United it is going to make more news.

"My job is to try and win and we have not won as much as I would have liked.

"I want us to play much better. I want us to continue improving and there are certainly signs we are doing that.

"We are also climbing the table but I don't want to get carried away because of one win against Arsenal.

"Maybe come the end of the season, if I am in a really strong position and we have won a lot of games it is more likely I will say something much more positive."