Caulker at the double as City beat Fulham 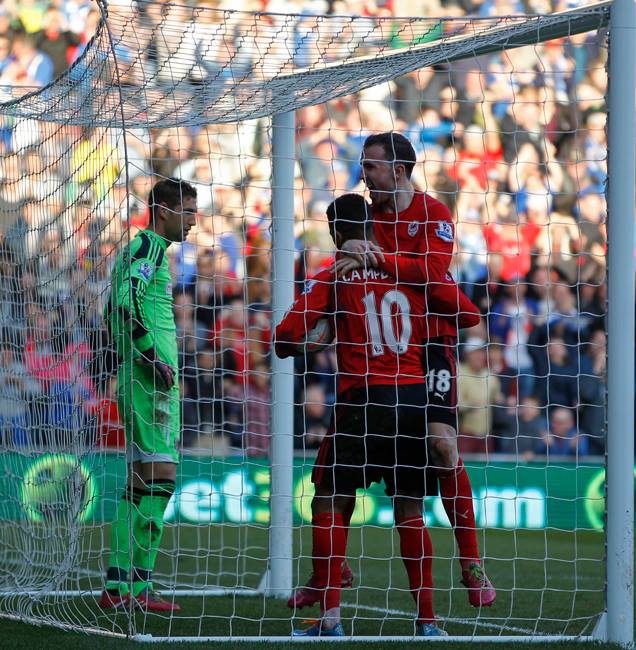 The defeat for Fulham means the Londoners have not registered a win since New Years Day and their fans are fearing that relegation is now a formality.

For Cardiff the hope of staying up is still alive. The win, City's second in the Premier League under Ole Gunnar Solskjaer, took the club up a place and with defeats on Saturday for WBA and Crystal Palace and the game between Norwich and Stoke ending in a draw, Cardiff gained points on relegation rivals.

Sunderland, the team that Cardiff leap-frogged did not play in the League this weekend but were beaten 3 - 0 in the FA Cup by Hull. Sunderland have three games in hand on Cardiff and are just one point behind the Bluebirds.

City scored their first goal in 444 minutes when Caulker side footed into an empty net from Craig Noone's cross on the stroke of half time.

Fulham levelled in the second half but Caulker scored his and Cardiff's second with a header from Jordon Mutch's corner.

Four minutes later the win was wrapped up when Mutch's effort after Noone's cross was saved by Maarten Stekelenburg but the loose ball bounced off Sascha Riether and into his own net.

It wasn't a game of the highest quality but for once Cardiff stepped up and delivered a result when they needed to.

Now if they can follow it up with something from Goodison Park against Eveton next week then we can start to think that miracles might happen.