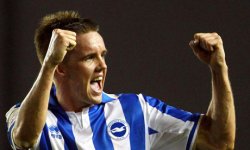 "We've made a bid and it has been turned down," Mackay confirmed today.

Noone has scored twice for Brighton in 19 legaue starts this season.

"At the moment it's going nowhere. I don't know what is going to happen but what is true right now is they've got no chance.

"They would have to more than significantly up their offer."