City loan out Velikonja and Oshilaja 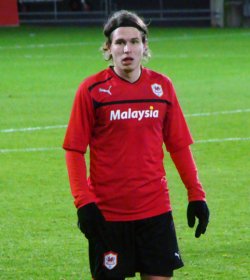 Cardiff City have loaned out striker Etien Velikonja to Belgiam club Lierse until the end of the season.

"We’d like to wish Etien the very best of luck during his time away."

Velikonja has not an impression in the first team under any manager since his arrival in 2012. But he has been prolific in the reserves.

Official: @EtiVelikonja on loan to Lierse in the Belgian Pro League pic.twitter.com/ppbSiaonWr

Another player loaned out is Adedeji Oshilaja to AFC Wimbledon. The defender will move to the League 2 outfit until the season ends in May.

Reports on Friday morning are suggesting that Malaga could be about to secure a loan move for striker Javi Guerra. The Spaniard has barely kciked a ball since arriving in the summer.