"All of the players want to do well for the fans here. Looking at the recent run of three wins, including two long trips up and back to the north of England, the support has been exceptional and very much appreciated. The noise levels at home to Derby was great, while at Sheffield and Doncaster it was really great to see the travelling fans in full voice.

"I'm sure that it'll be a similar story as we host Portsmouth. I'm told that we're close to a home sell-out, which is what we need, and will need for the remaining fixtures."

"I know what to expect at Cardiff, it will be probably be hostile again, but that's okay.

"I'm used to it now and it's part of football.

"Loads of players around the country get stick for whatever reason, so it doesn't bother me.

"To be honest, I hope Cardiff and Swansea are in the Premiership next season. That would be fantastic.

"Gary Speed would be buzzing at that, because the more Welsh players in the Premiership the better all round. I always look out for Swansea and Cardiff results, but if I play any part in the game, the only thing on my mind will be doing my best for Portsmouth."

Portsmouth winger Dave Cotterill (who is on loan from Swansea) 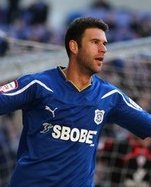 "Our intention is to go for five victories and yes, that will require us holding our nerve and staying focused. We must go into each game in the right frame of mind and then focus on the next one.

"It's hugely important that we go out against Portsmouth on Saturday and play well to set us off on the right foot. After that we'll look at Queens Park Rangers, then Preston and so on. Second spot is ours to lose now, so we're the team everyone is looking to chase down."

"Looking at the team that Cardiff have in the Championship, I think they have the best squad without a doubt. For some reason QPR have been more consistent and a lot stronger defensively but Cardiff deserve to be promoted and I think they have given themselves a great chance with their performances in the last three games."

"After a disappointing March, I thought their chance had gone but they've kept in touch and are now in pole position to take second place. With the squad of players they have got and with the disappointment of coming so close last season, I don't think they will want to go through that again.

"Cardiff showed against Doncaster and Sheffield United that they can handle the pressure of the tough games. You would expect them to pick up at least seven points from their next three home games.

"And that, I believe, will be enough to see them over the finishing line."