City win on the road at Middlesbrough 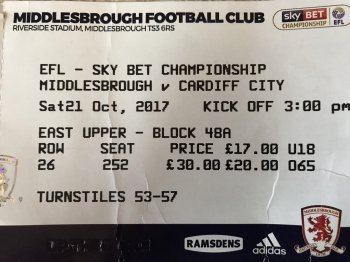 City don’t have the best of records against Middlesbrough but Neil Warnock’s side can feel it was three deserved points with a single goal the difference.

With ex jack Garry Monk in charge of ‘Boro there was an added incentive not to lose the game and it looked like a 0 – 0 was on the cards until Nathaniel Mendez-Laing was upended in the box by Boro’s late substitute (and perceived danger man) Adama Traore. Ralls stepped up and emphatically fired the ball into the net.

City saw out the game without too much trouble but did have a late scare when giving away a needless corner but anything other than the victory would have been harsh.

The best chances in the game came City's way, while there wasn't a lot of goal mouth action Danny Ward should have scored in the opening minutes but was denied by Darren Randolph's legs with onloy the keeper to beat and Junior Hoilett headed wide when it looked easier to score as the game entered the final stages.

The win was sweet for the 400 or so Cardiff fans who made the trip and it helped erase the disappointment of defeat last time out at Birmingham. Former City defender Fabio also threw in a quick 'Ayatollah'.

City stay second behind Wolves, who beat Preston 3-2 and ahead of Sheff Utd on GD who beat Reading 2-1.

Next up are back to back home games against Millwall next Saturday and Ipswich on Tuesday week.