Craig Bellamy to come out of retirement for SuperKev

Craig Bellamy is coming out of retirement to play again at Cardiff City Stadium. 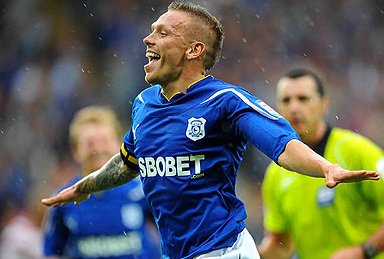 McNaughton is lining up many other former team-mates who will join him in Cardiff.

“I can’t wait to play at Cardiff City Stadium again and run out in front of those passionate Bluebirds fans again,” says McNaughton, who will be revealing more names of players returning to honour him over the next few weeks.

Bellamy, who ended his playing career with the Bluebirds in 2014 and made almost 100 appearances during two spells with the club, is back with the club as their player development manager.

He helped Cardiff earn promotion to the Premier League for the first time and played in the top flight for his home city club.

Kevin’s XI will take on a ‘rest of the World’ team at Cardiff City Stadium on March 26 and both will be selected by McNaughton.

The full line-up is set to be revealed over the next few weeks.

Tickets are on sale from the Cardiff City Ticket Office now, with an early-bird option available.

Early-Bird (for tickets purchased prior to match-day)

Supporters wishing to ask Kevin's committee any questions relating to the game can do so by emailing SuperKev@violafc.com