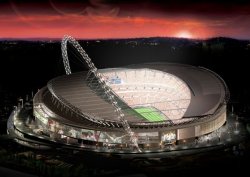 For the fans of most clubs in the football league that dream of getting to Wembley remains as just a dream. Some clubs have never had the chance to go there.

We have been lucky. In our lifetime we've seen our team three times at Wembley, one win but two heart breaking final defeats. That doesn't matter now though. What matters is that we go there again. Our whole history is topped by a Wembley win in 1927.

The dream doesn't stop, the dream doesn't end it keeps going. The pinnacle of a fans life is to see his club captain lifting the cup. We have one hell of a chance of making another final. Don't be dismissive that it's just the Carling Cup, the league is more important, it doesn't really matter. Of course it bloody matters.

I'm 45 years old, I still play (not very well, but I still play) and each week when I score at 5 aside I think that it could have been the winner at Wembley.

Moan all you like about getting London, the cost of things and the hassle but nothing would make me prouder than to be in North London at the end of February to witness Cardiff City in a Wembley cup final.

It may all go tits up tonight and then we can concentrate on the league and the quest for promotion but for one night only it's all about getting to Wembley.