In these turbulent times when a trio of judges can give their opinion that the Prime Minister of the UK has been untruthful when discussing why he wanted to close down Parliament with the Queen and it is arguable that it is the biggest news story of the day, the BBC’s reputation as a bastion of truth and impartiality has suffered accordingly – tonight we got even more evidence of how far the broadcaster’s reputation has slipped.

While the BBC website’s report of tonight’s game between Derby County and Cardiff City at Pride Park was truthful in terms of the scoreline (1-1), the scorers (former City man Scott Malone for the hosts and a first goal for us by Robert Glatzel from the penalty spot) and other matters such as team line ups, yellow cards issued, substitutions etc. it also contained a blatant example of “fake news”.

By describing the game as “an enthralling draw”, the Beeb provided an example of the sort of shoddy and/or plain dishonest reporting that so vexes the likes of Donald Trump!

Yes, the match had a kind of hairem scarem entertainment feel to it and, from a Cardiff perspective, it was more watchable than most we’ve played this season, but to describe it as enthralling is pushing it more than a bit. 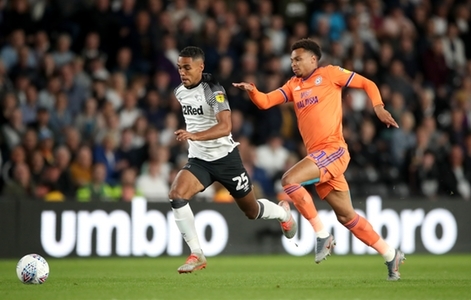 Having been a side that didn’t do draws for the final four months of last season and the first three weeks of this one, we’ve had three of them consecutively in the league now and, as always when a team goes on a run like that, it’s how you break out of the sequence that defines whether they should be seen as a good or bad thing.

Beat Middlesbrough next Saturday and then win at Hull and City will be going into October in a buoyant frame of mind on the back of six unbeaten league games and not far away from, or possibly in, a Play Off place. However, losses in those games would leave us five without a win (six if you include the shameful showing against Luton in the League Cup), too close to the bottom three and a manager coming under increasing pressure as supporter disquiet grows.

Although I talked in terms of a tiny step forward in my piece on the 1-1 home draw with Fulham just before the international break, it did at least represent an improvement defensively on what we had been seeing and, again, tonight I thought we didn’t do too badly at the back considering the concession of a goal inside the first six minutes.

Alex Smithies is definitely improving as the effect of playing regular first team football becomes clearer and, although their limitations when dealing with good movement and quick, direct running were apparent at times again, the Sean Morrison/Aden Flint partnership continues to develop.

In front of them, while you have to accept that they are never going to be dominant and dictate proceedings because we just don’t play that way, Joe Ralls and Leandro Bacuna are faring better than I feared they might when Marlon “he never gets an injury” Pack succumbed to a fairly serious one when his second appearance for us had barely started..

Outside of that though, there still isn’t a great deal to raise optimism levels in my opinion. Lee Peltier is doing alright and Joe Bennett is short of the standards he set for himself in the last two seasons (possibly because he doesn’t really have any competition for his place now).

In front of the full backs, Josh Murphy clocked up yet another away game where he makes little impact and is subbed around the hour mark and I’m afraid all Gavin Whyte is doing is making me think that our manager speaks so enthusiastically about him for the typically Warnock reasons that he puts in a defensive shift and works really hard – in terms of an attacking end product though, I’m struggling to come up with anything tangible from him in a City shirt yet.

With Lee Tomlin absent because of the effects of a car accident this week, Callum Paterson came in and, somehow, stayed on for the full ninety minutes – his season just hasn’t really started yet I’m afraid. One of the pluses of the night was that Robert Glatzel finally recorded his first goal for the club when he confidently converted a penalty, but I must say that in terms of the things he had impressed with in his previous matches (e.g. link up play and appreciation of where his team mates were), I thought this was his most disappointing match for us so far.

To be fair, the Sky commentary team made frequent reference to the amount of injuries we’ve had and I do admit that critics like myself have tended to ignore that this season in the rush to criticise the team, our manager and our style of play.

Nevertheless, would the return of the likes of Etheridge, Bamba and Pack cure us of the sort of sloppiness seen from City at the start of the second half tonight when, having shown definite signs of getting on top in the closing stages of the first half, they came out after the interval as if they were half asleep?

Better sides than Derby would have punished us in that first ten minutes or so of the second half when the familiar inability to control the ball in a manner that all (and I mean all) of our opponents are able to do reared its head yet again.

That’s the thing, for all of the fact that they were losing Play Off Finalists last season, Derby were not very good on the night. Occasionally there was good, slick passing in our defensive third, but, for me, they looked like a side that had not won in the league since the opening day of the season and had been beaten 3-0 in their last two matches.

In particular, Derby looked nervy and disorganised in defence. I have few doubts that our 17/18 side would have taken advantage of this and would have left the Midlands with three points, but this team is not showing enough of a cutting edge going forward – I can’t help thinking that getting Junior Hoilett, who again looked the most threatening of our wide players despite once allowing himself to be caught by Tom Huddlestone of all people as he shaped to shoot, into the starting line up would help in this regard.

City had been given one or two warnings by Derby before they fell behind with little mote than five minutes played following a spell of concerted home pressure which saw the ball pinging around in our penalty area. There was an opinion expressed on a City messageboard that we were unlucky to concede because the ball always seemed to be dropping to a Derby player and I have a little sympathy with that viewpoint, but I couldn’t help but agree with the opinion expressed by others that City had ample opportunities to clear their lines bur failed to do so.

Smithies was certainly unlucky when his fine save fell into the path of Martin Waghorn, but last ditch defending denied the striker only for the ball to find its way to left back Malone who tapped in from no more than four yards out for a goal which was certainly not celebrated by the scorer in the understated way sometimes seen when a player nets against a former club!

For a while it looked like City were in for another three goals conceded orange away defeat (why didn’t we play in blue tonight?) or worse, but Derby’s carelessness at the back and some wayward passing from the hosts began to suggest we could find a way back into the game.

However, it still came as a bit of a surprise when we were given the opportunity to level things up with the match still in its first quarter. In a very rare instance this season of a long throw into the opposition’s penalty area bringing about a scoring chance, Aden Flint glanced a header into the path of Glatzel whose shirt was tugged by Richard Keogh.

Robert Glatzel levels things up from the spot and Cardiff strike back at Derby.

📺 Watch it live on Sky Sports Football or follow it here: https://t.co/fXCZN1Ijo8 pic.twitter.com/EZD5oUSG9a

Such offences are often missed by referees and linesmen/women, but Darren England immediately pointed to the spot – it was the correct decision by the official, but television replays also showed that he may well have missed a foul by Bennett on Waghorn in the other penalty area seconds earlier.

Despite keeper Roos diving the right way, Glatzel’s penalty had too much pace for him and City were level. After that, they worked their way back into the game and it could be argued that they deserved to be ahead at half time – Roos was forced to save from Ralls and home midfielder Bielik diverted the ball onto the post as City stepped up the pressure and forced a series of corners.

That’s what made the start to the second period so disappointing – having recovered well from such an early setback, City again began a half very slowly as Jack Marriot crashed a shot from twenty five yards on to the crossbar and Smithies rescued his side after Waghorn had sliced through the centre of City’s defence in a manner reminiscent of the opening day defeat at Wigan.

The fact that the Derby storm blew itself out had at least as mush to do with their failings as it did with any good play from City and, for me, too much of what followed again showcased the team’s weaknesses when it comes to retaining possession (yet again, we barely managed to have the ball for a third of the game as Derby won the possession battle 64/36).

The frustrating thing was that when City could actually string something together, they nearly always looked dangerous – none moreso than when Hoilett worked his way to the bye line and put over a cross to the far post which Paterson, with his most effective contribution of the evening, nodded into the middle to Glatzel whose header was cleared off the line by Matt Clark.

That was as close as City came to winning the match and, truthfully, it would have been very rough on Derby if they had done because, despite their shortcomings, they had more scoring chances than us. Nevertheless, a draw was probably the right result when you consider both sides had thirteen goal attempts each – ah, but can you believe that, because they are BBC stats after all!