Cardiff City’s season spluttered along tonight with their fourth draw in eight games as they finished level 1-1 against a Derby County side that had not taken a point or even scored a goal at Pride Park before they faced us. 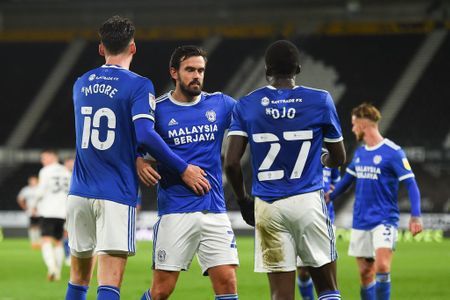 For the third successive match, City conceded the first goal (their first one in an away match this season) to go in one down at the interval only to come back in the second half to level things up. On the face of it, being able to come back from a losing position, particularly away from home, is a decent and acceptable outcome – especially when tonight’s draw means we have not lost in five games, but, based on the four matches I’ve been able to watch, we’re not playing well.

A record of won two, drawn four, lost two, goals for seven, goals against seven is suggestive of dull football and when you think that the matches I’ve seen (Forest, Preston, Bournemouth and Middlesbrough) probably represent most of our better efforts, you have to think that “dull” is a fair way to describe us.

Certainly, the commentary I listened to on Radio Wales tonight made it sound as if I wasn’t missing much. I’ve nothing against Rob Phillips, in fact I’ve said on here this season that I like his commentaries, but I did groan to myself when I switched on and heard his voice because the three previous games I’ve listened to with him describing the action were the dreadful League Cup loss at Northampton and the limp home defeats to Sheffield Wednesday and Reading.

I shouldn’t jump to too many conclusions when I’ve not seen anything of the game yet, but, based on those matches I have watched, the commentary provided by Mr Phillips, backed up by summariser Kevin Ratcliffe, did not come as too much of a shock.

Despite Ratcliffe being quite impressed by our first five minutes or so, there was nothing sounding like we were causing the home defence any alarms and things got worse from there – in fact, until we woke up somewhat in the final moments of the half, I heard nothing to indicate we were in the game as an attacking force.

Hardly surprisingly given their poor home results and not much better away return, Derby were pretty cautious themselves early on, but they were growing into the game and it was they who had done all of the worthwhile attacking before they took the lead on twenty four minutes when Martin Waghorn curled in a free kick for a second successive game after Welsh international Tom Lawrence was fouled by Joe Ralls after City had, not for the first time, conceded possession in a dangerous area with their trademark poor passing.

With the arrival of Harry Wilson to join Lee Tomlin I had assumed we’d seen the last of Ralls as our most attacking central midfielder, but with Tomlin still not quite ready for a return following his suspension and Wilson absent from the eighteen with what had to surely be an injury of his own, I was wrong – Ralls was our number ten with Marlon Pack and Will Vaulks behind him.

There was mixed news when it came to our full backs with Leandro Bacuna at right back because of the injury which forced Jordi Osei-Tutu off on Saturday (it looks as if the loan signing from Arsenal will be out for between four and six weeks), while Joe Bennett was able to return on the left in place of Joel Bagan who had done all that was asked of him in the previous two matches. While Bennett’s return was understandable in many ways, it also struck me as typically Cardiff City in that the young player steps down as a matter of course despite having played better than quite a few of his seniors while he was in the team.

For the twenty minutes or so after Derby scored, the impression I got from the commentary was that they were very comfortable as City, with their midfield three being bettered by the home team’s two according to Kevin Ratcliffe, struggled away with our isolated front man Keiffer Moore getting no service worthy of the name.

However, the last minute or two offered some hope as Moore nodded a Vaulks cross onto the outside of a post and we forced a couple of corners, one of which led to a fleeting chance for Junior Hoilett, back in the side in place of Josh Murphy, which he lofted over from fifteen yards out.

Derby did have one last opportunity to again get the first touch on a corner of their own as City again showed the fallibility in defending set pieces that has cost them so much in home games and there could be little doubt that they were fully worth their lead at half time.

The second period started promisingly when Hoilett also hit the woodwork with a header from a Sheyi Ojo cross and we were definitely giving a better account of ourselves, but, even with a Wilson or a Tomlin on the pitch, we do not create a great deal of chances and Robert Glatzel was introduced just after the hour mark for Vaulks.

City had played their best football in Saturday’s grim draw with Middlesbrough when Glatzel came on to accompany Moore and while that was also probably true here, there was not a great deal coming down the radio commentary to suggest that we were going to get on terms as the match moved into its final quarter of an hour.

However, Ojo, who seems to be the City winger most likely to make something happen at the moment, got himself an assist to go with his couple of recent goals when he sent Moore through and the striker, who has hardly been having chances galore created for him since his brace of goals in our second match at Forest, calmly tucked his shot past Kelle Roos, who was deputising in the Derby goal for the injured David Marshall.

Both sides looked for a winning goal after that without really suggesting they had it in them to find one and so City finished up with a draw which has seen the first rumblings of discontent against our manager on the messageboard I use tonight – I think that’s uncalled for at the moment, but a return of ten points from eight games and a position just below halfway in the table seems about right based on what we’ve done so far.