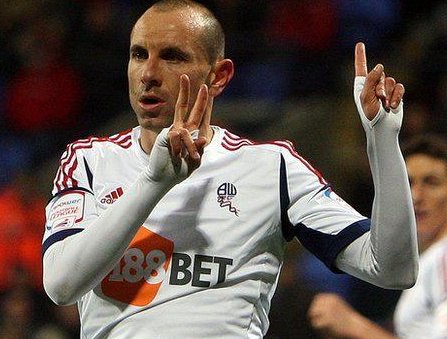 In charge for the first time Freedman, assisted by former City boss Lennie Lawrence inspired his side to turn over a one nil half time deficit.

Cardiff had largely kept Bolton quiet in the first half and had taken the lead when Craig Noone turned, shot and finished from 18 yards.

But like at Palace when City threw away a two goal lead to lose 3 - 2, Freedman's half time team talk and subsequent substitutions won this game as well. The introduction of Ngog and Petrov (pictured reminding City fans what the score was) proving to be the difference.

The home side pressed from the start of the second half but City saw off that pressure and then enjoyed a period of presure themselves resulting in several corners and throw ins but Bolton were starting to get more attack minded. Ngog had a perfectly good goal disallowed before winning a soft penalty. Petrov scored and soon after Bolton led when Ngog got the final touch on a Bolton shot. There was a call for offside with a Bolton player lying prone in the middle of the goal.

Bolton had a few decent efforts but as the game wore on City had no option but to attack as Bolton dropped deeper. Mark Hudson felt he should have had a penalty when he was bundled over and then with virtually the final action David Marshall, hoping to be a last minute hero, neatly controlled and shot on target only to see his effort bounce off the fortunate Bolton keeper and over the bar.

Tempers were frayed on and off the pitch with Hudson angry at the decision not to award City a penalty and in the stands where City fans were engaged in arguments with police and stewards that saw several fans ejected.

An unsavioury end to the day that sees City keep top spot but Middlesbrough, Palace and Hull are closing in after all three won. Thankfully Leicester lost but Cardiff must win their games and not keep going away and getting mugged.

City haven't lost back to back games all season. So hopefully Tuesday nights game at Charlton will see the team bounce back.

As a demonstration of what can be done at Charlton 2nd placed Middlesbrough (on GD) won there yesterday 4 - 1.