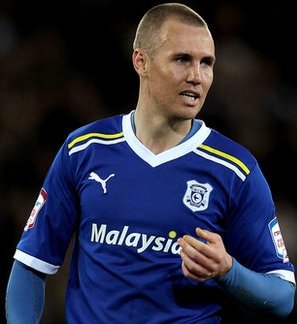 Cardiff have injury worries over strikers Kenny Miller (right) and Rudy Gestede for their Championship clash with Watford.

Miller had to be substituted after just six minutes of the Bluebirds' 2-0 victory at Middlesbrough on Saturday following a collision with Boro goalkeeper Jason Steele and the Scot's resulting knee problem may keep him out of the visit of the Hornets.

Gestede, meanwhile, has an ankle knock sustained during the match at the Riverside and the Frenchman too could miss out as Cardiff look to continue their push for a play-off place.

Both players will be assessed prior to kick-off at the Cardiff City Stadium.

Bluebirds manager Malky Mackay said: "They are both up walking about which is a good sign to start with. Whether that's going to make any difference we'll have to wait and see."

Watford have no new injury or suspension problems after having seen their outside Championship play-off hopes hugely dented by Blackpool on Good Friday.

The Hornets' 2-0 defeat at Vicarage Road ended a seven-match unbeaten run which had put Sean Dyche's side in with a shout of challenging for a top-six finish.

Dyche kept faith with the same XI against the Seasiders as the one which triumphed 2-0 at Leeds the week previous, although the likes of Joe Garner and Prince Buaben could now come into contention for a start in the Welsh capital.

Centre-back Adrian Mariappa (ankle) remains the only absentee as Watford, who shared a 1-1 draw with Cardiff earlier in the season, prepare to be reunited with former boss Malky Mackay once more.