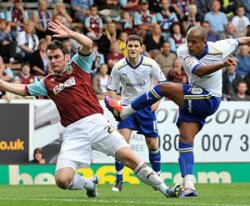 Robert Earnshaw has moved on a season long loan to Maccabi Tel Aviv.

"I am delighted with this latest addition," said Maccabi sports director Jordi Cruyff.

"The last day of the transfer window always gives pleasant surprises and this is one of them. His goal-scoring record speaks in itself."

"Cardiff City Football Club wish Earnie all the very best during his time in Israel."