Echo come out in support of Blue

Echo Editor Tim Gordon has admitted the paper was wrong not to oppose Vincent Tan's crass rebrand of Cardiff City. With fans more and more turning up at games in blue and chanting for a return to blue the paper has backed public opinion. 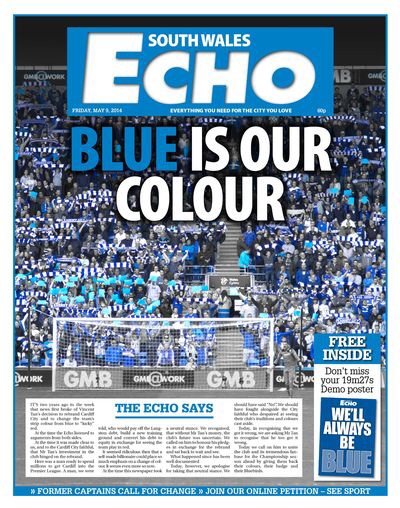 It’s two years ago to the week that news first broke of Vincent Tan’s decision to rebrand Cardiff City and to change the team’s strip colour from blue to “lucky” red.

At the time the Echo listened to arguments from both sides.

At the time it was made clear to us, and to the Cardiff City faithful, that Mr Tan’s investment in the club hinged on the rebrand.

Here was a man ready to spend millions to get Cardiff into the Premier League. A man, we were told, who would pay off the Langston debt, build a new training ground and convert his debt to equity in exchange for seeing the team play in red.

It seemed ridiculous then that a self-made billionaire could place so much emphasis on a change of colour. It seems even more so now.

At the time this newspaper took a neutral stance. We recognised that, without Mr Tan’s money, the club’s future was uncertain. We called on him to honour his pledges in exchange for the rebrand and sat back to wait and see.

What happened since has been well documented

Today, however, we apologise for taking that neutral stance. We should have said “No!”. We should have fought alongside the City faithful who despaired at seeing their club’s traditions and colours cast aside.

Today, in recognising that we got it wrong, we are asking Mr Tan to recognise that he too got it wrong.

Today we call on him to unite the club and its tremendous fanbase for the Championship season ahead by giving them back their colours, their badge and their Bluebirds.

Add your name to our online petition now