Feedback on the Canton Stand drum 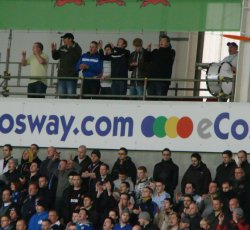 However there are a small minority who have criticised also whose comments we also need to take on board.

Some of the criticism has been aimed at my ability to play a bass drum! For the record I played drums for 18 years from 1982-2000 in various bands throughout South Wales playing all over the UK. Those who are knowledgeable about drumming will understand that thumping a base drum with a beater is a totally different discipline to the finesse of playing a drum kit. I have not picked up a set of sticks for 12 years and will be first to admit I got a bit to do to get back in the swing of it if I am to continue until a replacement can be found. At the end of the day it's a bass drum I'm not going to be able to play double paradiddles on it or triple ratamacues it's there just to keep the beat and momentum going.

Now if other musicians are willing to put their neck on the line we could create a lot more variety and entertainment instead of a Bass drum just keeping a beat.

I take on board the constructive criticism that's been aimed towards me here is a selection: "The beat is to slow it's like a funeral march": "the drummer is beating the drum to fast at times it sounds like the flight of the bubble bee" "The drummer cut in over some spontaneous singing" "the drum was out of tune" "the drummer has clearly never played in his life" etc. Some Valid points on there like getting the drum in tune; The bass drum arrived Friday evening those musicians amongst us who have drum kits will know the manufacturer drum heads are crap, and the first thing you replace are the skins, so I will try and get a set of Evans heads before tomorrow night, however I will admit I've never had to tune a marching drum before which has 2 batter heads so you may have to bear with me for a while sorry with that one! To fast To slow don't know what to say about that, I just follow the lads who start the singing with me? I will be banging it a lot less to allow for more spontaneous singing, as I agree that is also good for the atmosphere, and my arm and hand were killing me after 5 minutes I could barely hold the beater.

This is a reaction to the fans survey from last year so I am fully supporting the club and the fans who want to give this a try. If there is any drummers out there who wish to have a go you are more than welcome, I do have a couple of drummers interested and will be introducing them over the coming weeks. I am more than willing to take a back seat if someone else wants to have a go, but unless we get some offers I am afraid you will have to put up with me for the time being and my limitations. The trial will be over a fair period of time so the drum is here to stay for the short term. We will also be taking names from any supporters who wishes to have a go singing on the platform with Dibbs and I. We are only allowed 9 people up there at a time but either call in the supporters club shop or ring me with your details then I can add you to the list and try and get you on there.

Finally big thanks to everyone who has given me full support in this either through Facebook, text, or just coming up and saying well done keep it going