Five wins in a row as City hunt down the Wolves

Neil Warnock manages to field 11 players week in week out that can win football matches.

His team selections are getting more difficult as each week passes and more players drop out injured. Sean Morrison, Joe Ralls, Aron Gunnarsson, Gary Medine, Jazz Richards all out and then after an hour v Barnsley, with City 2 - 0 up Warnock withdrew Marko Grujic (possibly to protect him as he was on a yellow) and Callum Paterson who was visibly struggling.

With City in full control after Paterson made it 1-0 before half time and Grujic finished brilliantly to make it 2-0 after the break, the second half swung in Barnsley's favour. 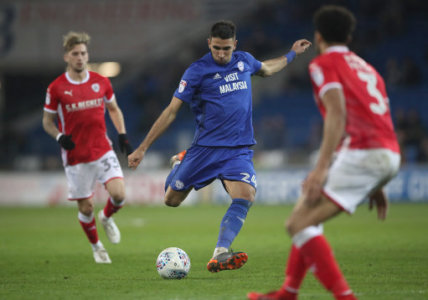 The loss of Grujic and Paterson within minutes of each other lost City's command of the game and Barnsley ran the match for the final half an hour. But despite their threat they could have ended up more convincingly beaten.

They pulled a goal back when Swansea loanee Oli McBurnie turned in the box to score and looked to have the momentum to score again but some brave keeping from Neil Etheridge and a shot shy final approach from Barnsley alomost allowed City to score more goals on the break.

Craig Bryson scuffed an effort wide with just the keeper to beat and deep in injury time Nathaniel Mendez-Laing saw his 20 yard effort hit the inside of the post.

But City held avoided conceding in the five mins of added time and the further two mins the referee added after that.

The win puts City just three points behind Wolves, who ply Leeds on Wednesday evening. It was a crucial three points as both Villa and Fulham rcorded 3 - 0 victories in their games.