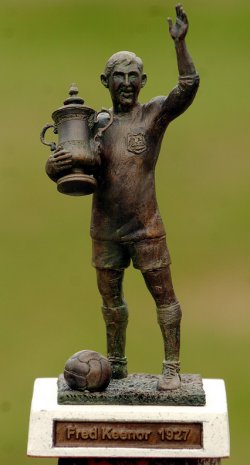 That means the appeal committee will now be able to apply for £15,000 promised by Cardiff council once invoices for the work carried out by artist Roger Andrews have been received.

Roger, who is from Llantwit Major, has started work on the statue from a workshop in Llantwit Major – but even with the council donation we will still need to raise another £25,000.
David Craig, the appeal fund’s project manager and a Trust board member, said: “Thanks to the fantastic support of Bluebirds fans we have reached an initial target of £45,000.This allows us to apply for funding from Cardiff council once we receive and pay the invoices for the work carried out by Roger.
“But there can be no let up in the funding because even with the council’s £15,000 donation, we still need to raise a substantial sum to make the dream a reality.
“We know the quality of work that Roger produces – you only have to look at the Sir Tasker Watkins statue outside the Millennium Stadium. Fans have dug deep in these difficult times but we still need everyone to pull together to make this a reality.”
The appeal was launched less than two years ago in April 2010.
Mr Craig said that a number of fundraisers were planned during 2012 and the Cardiff City Supporters’ Club was also planning to hold events in aid of the appeal.
“We have had some substantial individual donations of up to £500 while children have handed over their pocket money which is fantastic.
“There’s also been great support from local businesses and from Cardiff City Football Club.
“It would be fantastic if we could hit that £85,000 total this year, enabling the statue to be erected in a very prominent position outside the Cardiff City Stadium. This is a project for all City fans – please help us reach our target.”
A raffle will be held in aid of the appeal at the celebration at the Cardiff City Stadium next month to mark the 10th anniversary of the FA Cup triumph over Leeds United.
Donations to the appeal fund can be made through the Co-operative Bank:
Account name: - Fred Keenor Statue Fund or FKSF
Account no 65392368
Sort Code 08-92-99
Donations can also be made at the Trust office (near Gate 5) on match days while cheques can also be sent c/o CCST to PO Box 4254, Cardiff, CF14 8FD. Please add the words “Fred Keenor Appeal” on the top of the envelope.