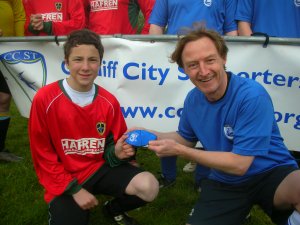 The Supporters Trust won the match at St Joseph ’s field in the Heath 8 – 3 with some superb goals from Alex Knight and John Howells. The match follows a tour of the Cardiff City Stadium by twenty members from the Jewish community last month and following Sunday’s success, the game looks set to become an annual fixture. The match raised more than a hundred pounds to help build a statue to commemorate Fred Keenor, Cardiff City’s 1927 FA Cup winning captain.

Tim Hartley, Chair of the Supporters Trust, said, “We have been working with different community and religious groups across Cardiff , taking them to City matches and playing friendly games against them.  We want to share our passion for the game with them so that they too will become Bluebirds fans. Football is a great way to promote friendship and community cohesion and we all enjoyed playing against the synagogues.”

Neil Schwartz from the Cardiff synagogue, said, “We all had a great day on Sunday. A match like this helps deepen the relationship between the Supporters Trust and Cardiff ’s Jewish community, young and old, even though some of the older members might be feeling a bit sore! On the pitch my brain said one thing, my body another, but we would really like to thank the Trust for organising the visit to the stadium and for all their community work.” Colin Heyman added, “The Jewish community in Cardiff has for long been a part of the life of the city in many ways, in work and in play. This was a great way to build on the links between Cardiff City FC and Cardiff 's Jewish community, some of whom are longstanding Bluebirds fans. One of the great things about it was that players ranged in age from 12 - 56!"

The Cardiff City Supporters Trust was set up to give fans a voice in the decision-making process of the club, and to strengthening the links between Cardiff City and the community it serves. Read more at www.ccfctrust.org