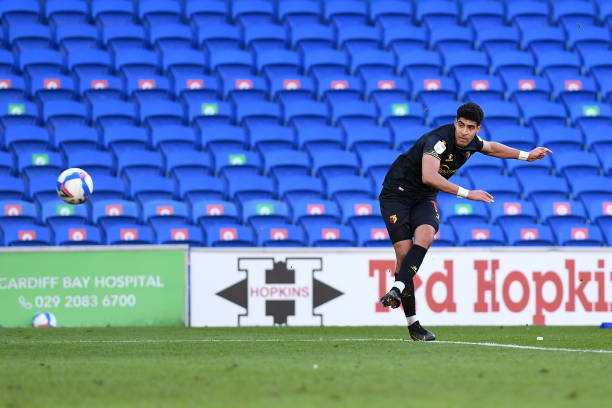 A free kick smacked towards the centre of the City goal by Adam Masina (pictured) looked like meat and drink for Dillon Phillips but incredibly the keeper dived out of the way to the disbelief of everyone to hand Watford the win.

Cardiff had led after a 14th min cross by Josh Murphy was diverted into his own net by Francisco Sierralta. Excellent work from Murphy forced Sierralta to stop a Kieffer Moore tap in by putting the ball past his own keeper.

But the lead only lasted a minute before Nathaniel Chalobah showed some sublime skill to fashion out enough space to fire low past Phillips.

The next 75 minutes couldn't separate the sides as the game went into 5 mins added time. Watford won a free kick on the corner of the box and when Masina fired the 94th minute effort goalwards it looked to be a wasted effort with Phillips in prime position to block but he misjudged the flight of the ball and a stunned Cardiff City were beaten when a scrappy point was almost in the bag.

Elsewhere Barnsley winning at Bournmouth was further disappointment as 6th place is now 7 points away. Our small cushion over Middlesbrough behind us has also eroded as Neil Warnock's side beat Stoke 3 - 0. The third goal coming from Nathaniel Mendez-Laing.

Two big games coming up this week now. Stoke at home on Tuesday before the South Wales derby at The Liberty on Saturday evening against a Swansea side who have a serious chance of automatic promotion.