Fulham will play Brentford in the Championship play-off final after edging past Cardiff despite defeat in the second leg at Craven Cottage. 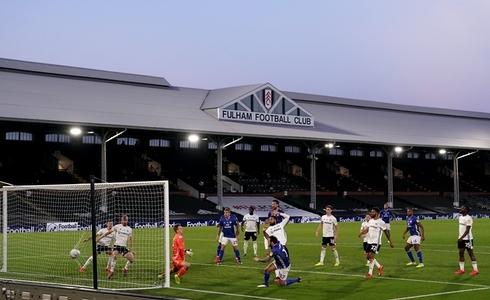 Cardiff were aiming to become the first side in Championship history to overturn a two-goal deficit from a semi-final first leg, and they went close to doing just that with a 2-1 win on Thursday night, but eventually succumbed to a 3-2 aggregate defeat.

Curtis Nelson scored early to give Cardiff hope, but they conceded a leveller on the night within a minute as Neeskens Kebano struck - adding to his impressive free-kick at the end of the first leg that proved so vital in this tie.

Lee Tomlin then put the Bluebirds back to within a goal of parity, but Fulham held on to seal their spot at Wembley, where they will face their fierce west London rivals Brentford on Tuesday night - live on Sky Sports Football from 7pm (kick-off 7.45pm).

Cardiff would have been dreaming of a bright start to give themselves some hope in the tie, and they got just that after eight minutes. Fulham failed to deal with a corner into the heart of their area, and Nelson rose to nod home.

Their optimism would last less than a minute, however. Just 24 seconds after the restart and Fulham restored their two-goal advantage in this semi-final. Bobby Decordova-Reid was afforded far too much space in the right channel to cross low for Kebano, who continued his excellent recent form with a low strike past Alex Smithies.

Neil Harris reacted at half-time to try and get Cardiff back into the game, throwing on Nathaniel Mendez-Laing and Tomlin, and immediately the pair combined to get Cardiff to within a goal of Fulham again. With 47 minutes on the clock the home side failed to deal with another long throw, Mendez-Laing then saw a header saved, but Michael Hector's failed attempt at a clearance fell perfectly for Tomlin to volley in from close range.

Cardiff pushed for an equaliser and went so close to getting it on 72 minutes. Fulham had Marek Rodak to save as he denied Mendez-Laing from point-blank range, before reacting quickly to tip over a stinging Will Vaulks volley.

But there would be no comeback in the end, as Fulham held on to reach the final and keep their dream of an immediate return to the Premier League alive.