Just a shortened reaction piece this time because my dodgy internet connection chose tonight to have one of its off periods and so I only really got to watch about half of City’s 2-0 defeat at Fulham. Therefore, I’ll just concentrate on a few major incidents I got to see and some general impressions on how the game panned out and where we stand going into our final three matches. 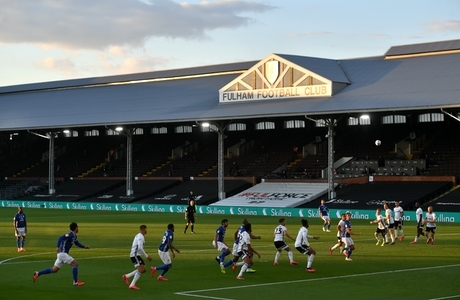 The first thing I’d say is that City had more of the game than I was expecting and there were periods at the start of both halves when we looked to be in charge, but I thought we lacked the quality that Fulham were able rely on in attacking areas and by the end could have few complaints about the outcome as the home team had plenty of chances to damage our goal difference further.

Before and during the match, Sky made quite a bit of our good set piece record this season. They weren’t wrong to do so because we have scored more from set pieces than any other Championship side, but we occupy that position solely on the back of what we did pre lockdown. Post lockdown, we’ve been ordinary at best in this facet of the game in terms of delivery and execution and, by the end, one of the major reasons for Fulham’s win was that they defended set pieces (and they had a lot of them to deal with) much better than an often lax City defence did.

Neil Harris restored Callum Paterson and Nathaniel Mendez-Laing to the starting line up and the latter began the match as if it might be one of those occasional games where he proves to be virtually unplayable before fading and eventually being withdrawn. The winger, who had missed the Blackburn game because of the imminent arrival of he and his partner’s first child, best moment coming when he forced home keeper Rodak into an urgent near post save after he had seized on another piece of loose play from Fulham during a very careless first quarter from the home side.

However, I’m sure I wasn’t the only City fan thinking that we would pay for not having taken advantage of this early period of supremacy and the truth was that, once they started to play, Fulham created far more danger to our goal in ten minutes or so than we did theirs in twice that time.

To be fair, City did react well in the short term to falling behind to a Mitrovic penalty (more on that shortly) when Joe Ralls cracked a fine shot against the crossbar and then, from just about the only chance created from a set piece all night, he got on the end of a Sean Morrison flick on of a Will Vaulks long throw, but could not keep his header down.

Both incidents came within a few minutes of a slightly lucky home penalty in that a deflection on the initial cross made it a more threatening situation for the City goal than it might otherwise have been. Also, Mitrovic got a away with a foul on Dion Sanderson which happened before the ball reached the pair of them and when the young full back reacted with an obvious tug on the Serbian international, it was this that referee Gavin Ward spotted and penalised.

It’s not often a penalty will attract special praise for its quality, but I thought Mitrovic’s spot kick conversion high into the corner of the net above Alex Smithies’ dive was superb and made our young full back pay fully for what was a naive and panicky response to the actions of a canny striker.

It should be repeated that Sanderson had been fouled, but he shouldn’t have reacted like he did. It’s been a chastening few days for Sanderson as, for the first time in his senior career perhaps, he’s had to experience the other side of the game following a very promising initial few games  for us and, after giving away a needless corner shortly afterwards, it wasn’t really a surprise to see him make way for Lee Tomlin at half time as Leandro BAcuna moved to right back.

Former City man Bobby Decordova-Reid was first unlucky and then at fault for not putting his team two up when his lovely curled effort from twenty five yards was destined for the same corner of the goal Mitrovic’s penalty found until Smithies intervened marvellously by turning the ball onto the crossbar and over.

Not quite as impressive from Decordova-Reid though was the way he nodded a tempting Knockeart cross wide from no more than five yards out and it ensured that City were able to get to the interval just the one goal behind,

For a while, City suggested that they might just get back into the game as they put Fulham under more pressure, but, unlike before the interval, there wasn’t really much to suggest that any of it might bring a goal.

Indeed, I think the “what if” moment after the break for us was when home centreback Michael Hector was only shown a yellow card following a clash with Paterson – in truth, it looked like no more than a cautionable offence to me, but Hector could easily have picked up a further yellow later in the match.

Again, once Fulham started to piece things together, it was they who were always more likely to get the match’s second goal – they could have had further penalties for a Curtis Nelson handball and then a Ralls foul within seconds of each other – full back Christie was left unmarked from a free kick to head over when he should have scored as well.

There were other chances for the home team as City responded with a series of long throw ins by Vaulks which, the occasional Morrison flick on excepted, only served to show how well the home defence stood up to the aerial bombardment it faced.

Maybe things might have been different if the hosts did not have the security of a second goal to sustain them, but I doubt it really – impressive though Josh Onomah’s shot, taken early, far beyond Smithies into the corner of the net, was, it probably wasn’t needed.

So, Fulham can still dream of automatic promotion (can’t see it happening myself mind), but for City, it looks like going right down to the wire. Looking at this weekend’s fixtures, I wouldn’t be surprised at all to see us still in sixth place going into our game with Derby on Tuesday, but, having thought seven points from our last five games would be enough, it’s probably six, if we’re lucky, from three we’ll need now and don’t forget that two of those matches are at Cardiff City Stadium, the ground where we don’t win any more unless we’re playing one of the two sides who are going up automatically this season!