Cardiff cannot mathematically get relegated on Saturday if they lose and Brighton win but the goal difference would mean it was inevitable. But on the other hand a Cardiff win and a Brighton defeat would swing the odds around in Cardiff's favour.

City play at 3pm at Craven Cottage against already relegated Fuham. The Cottagers, with pressure lifted from them, have won their last two games and will not be an easy opponent for the Bluebirds.

Brighton are at home to Newcastle at 5:30pm.

Cardiff must gain four more points than Brighton in the final three matches.

Cardiiff are away at Fulham, home to Palace and away at Man Utd.

Brighton are at home to Newcastle, away at Arsenal and home to Man City on the final day. 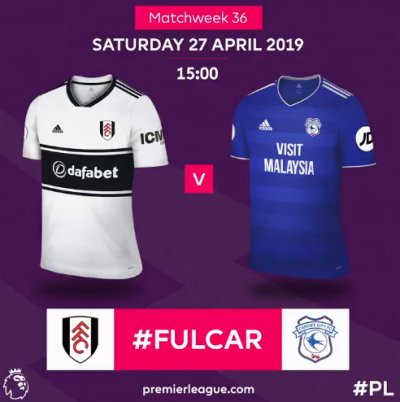 Fulham could have defender Alfie Mawson back in contention following a long-term knee problem for the visit of relegation battlers Cardiff.

Midfielder Tom Cairney should be available again after missing last weekend's win at Bournemouth following the birth of his child. Andre Schurrle may sit out Saturday's game as his wife is due to have their baby.

Cardiff midfielder Joe Ralls has been ruled out for the remainder of the season with a hamstring injury while Harry Arter is facing a battle to recover from a calf strain.