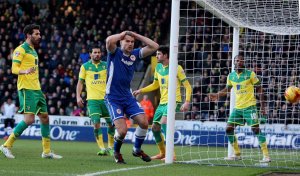 Goals from Alex Revell and Kadeem Harris were not enough get anything out City's trip to East Anglia.

The goals, within five minutes of each other, gave City a 25 minute window to find an equaliser but despite an Alex Revell header going inches wide a third goal never came.

City's goals against over the few weeks is a concern. Watford (4), Bournemouth (5), Brentford (3) and now three from Norwich mean City have conceded 16 goals in the last six league games. With the teams mentioned above all enjoying three points off the Bluebirds.

Russell Slade's management will now come into question as the club are turning into a long ball side with a dodgy defence. It's not pretty to watch and when you concede so many goals you are going top lose on a regular basis.

Fighting comebacks offer little comfort when you are comprehensively outplayed and several goals behind at half time.

I imagine Slade will say that we scored two and missed a penalty but quite simply it's not good enough.

Next up Cardiff head to Middlesbrough on Tuesday night. With the form Middlesbrough are in I wouldn't be surprised if the scoreboard is working overtime again.

1st half report below.

Half time at Carrow Rd and it's a disaster as far as Cardiff City are concerned.

Norwich, under new boss Alex Neil, are cruising against the struggling Bluebirds.

Gary Hooper and Kyle Lafferty put Norwich two up inside 25 minutes but Cardiff were given a lifeline when Adam Le Fondre was tripped in the area. Peter Whittingham stepped up but his spot kick was saved by John Ruddy.

That was Jerome's third goal against his former employers. Jerome scored for Norwich at CCS earlier this season and scored for Palace against City last season.

Former Norwich player Darren Huckerby has been less than impressed with Cardiff and their tactics.