Q. It must have been a sickener after working so hard to get back into it?

Neil Harris: It's a kick in the proverbials, I've got to be honest. 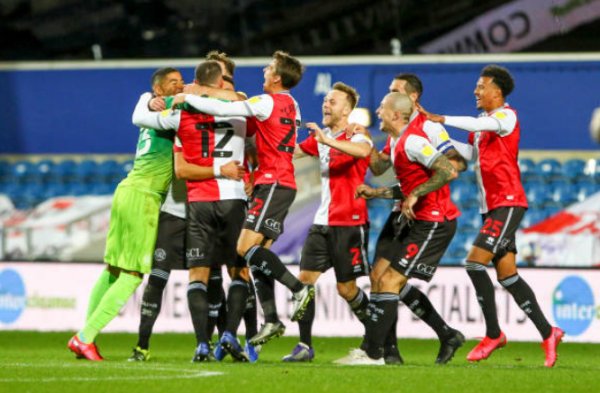 I will be honest, as well, because a lot of our fans will be watching the game. We got what we deserved over the course of the 90 minutes.

First half was the worst I've seen during my time in charge. People might disagree but in my opinion, outfought, outrun, too many first contacts, second balls. Didn't defend the penalty area.

In the first half hour of the game, we can't keep giving teams head-starts.

I praise my players in the second half, outstanding. It might be two penalty kicks we scored but we deserved more, we bossed the game, much better and we looked a real threat.

People will watch that goal [from Ball] and say 'Oh, what a goal, a goal worthy of winning any game' and it was, but it sums us up.

Yes he has a lot to do, he sticks it in the top corner from 30 yards, fair play to him, but it's not acceptable.

I'm gutted tonight, I've got to be honest.

Q. A positive you can take is that you came back so well?

But I don't want to keep going on about that.

I'm here to win games of football as Cardiff City manager and I expect my players to be the same, I expect the same mentality.

Why are we not getting it at the moment? That's what I've got to look into. Why have we not been the same this season?

I keep sugar-coating it but we've got to be better.

Yeah, I can praise my players for the second half and my disappointment at the winning goal but ultimately I want to win.

Q. A case of picking the players up now. Can they bounce back?

NH: They've got to bounce back, that's their jobs.

It's their jobs to represent this football club to the best of their ability and at the moment they're not doing it.

Q. Harry Wilson, confident he will play against Barnsley?

NH: Yeah, we hope to have more attacking players available. Great to see Lee Tomlin get 28, 29 minutes of football today and we saw his quality at times.

We also saw moments where he is just that half a yard off, but he will get there.

We want Harry Wilson back as soon as possible and Robert Glatzel, who was unwell today.

To have those three players available makes a massive difference to us and changes the way I want to play football and set the team up.

Q. What do you say to your players at half-time after that?

NH: I can't repeat that here. Not until the watershed.

I left them in no uncertain terms where they are falling short, who is falling short and what I expect moving forward.

You can tell from the tone of my voice, I am never this angry talking to you guys [the media] after a game.

I said in my interview on my first day I took the job, at Hensol Castle, and I said it after the play-off semi-final, I've come here to be successful and win games of football.

If my players don't want to do that then they don't play. It's as simple as that.

QPR's Mark Warburton: "In the first half we played very well and looked a very good team. Energy was the key for us today. We played with real intensity and purpose. We got into good areas and were dangerous. But it's a 90-minute game. We've got to learn from the second half, where we shot ourselves in the foot by giving away ridiculous penalties.

"From a comfortable position - we should have been 3-0 up - it's 2-2 and they're putting balls in our box. When you're in the area against good forwards you've got to make good decisions, and on those occasions we didn't."