Cardiff have had players play for them who appeared at World Cups but not while they were on the City payroll.

On Tuesday evening Kim Bo-Kyung could become the second Cardiff player to appear at the tournament when South Korea face Russia. 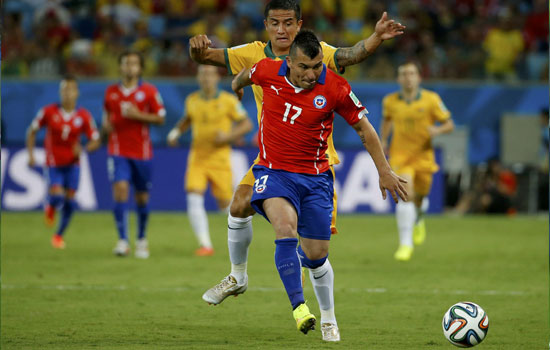 While the Chilean is still under contract to Cardiff at the moment it's like he's played his last game for City. Spanish club Valencia are thought to be a likely destination for Medel who cost Cardiff £11m last summer.

Unfortunately 'El Pitt Bull' failed to impress as the season wore on after an impressive start.

The last serving City players to represent their country were Derrick Sullivan, Ron Hewitt, Colin Baker, Ken Jones and Graham Vearnacombe when they played for Wales in Sweden in 1958*.

Over the years players like Adrian Alston, Eddie Johnson, Russell Osman, Robbie Fowler, Jimmy Floyd Hasselbaink, Fan Zhiyi, Trevor Sinclair, Paul Ramsey, Junichi Inamoto & others and this seasons players Kenwynne Jones and Peter Oedemwingie have all at some time been to a World Cup finals.

Junichi Inamoto scoring for Japan in 2002.