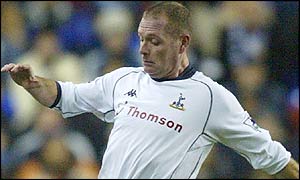 Gascoigne has worked hard on his fitness
Welsh Premiership leaders TNS have made an audacious bid to sign Paul Gascoigne.

The former England midfielder is currently without a club and TNS owner Mike Harris says talks have taken place between the two parties.

He was hopeful of a deal at the start of the week, having talked to the player's agents.

Harris says that the wage demands were within reason, but he is waiting to hear back from Gascoigne, who is still considering an option to play in Malta.

"I made some enquiries through a close associate of the club who happened to know Paul as a personal friend, and the early signs were very encouraging," Harris said.

"Monday and Tuesday they were very excited about it.

"There were claims that Paul didn't want to go to Malta, where there is a deal on the table for him.

"He claimed that he wanted to stay in the UK and play football if possible.

"The figures they were talking about were well within the budget that our business would be able to afford."

Marsaxlokk announced on Monday that the former England international was flying out to the Mediterranean island to discuss a possible move.

The club were reported to be ready to offer Gascoigne a salary of Â£12,500 a month, plus an apartment in the exclusive resort of St Julian's.

Gascoigne has worked intensely to regain the fitness needed to make a return to the game.

But since being released by Burnley at the end of last season, he has failed to find a club.

The former Newcastle, Tottenham, Rangers, Middlesbrough and Everton midfielder has been linked with numerous clubs, but for various reasons has failed to gain a contract.

Only last month, Gascoigne pleaded with former manager Terry Venables to give him a chance at Leeds United.