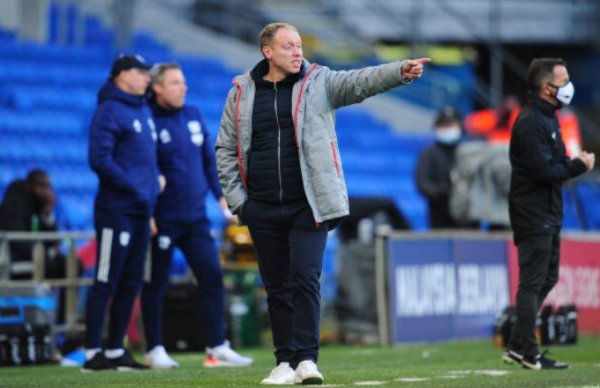 "Even though we had won four games before that, I look at myself with that," he said.

"It's my team and we've been on a great run. I take responsibility for the performance and result today.

"I look at myself more than anything and think, 'Did I make the right team selection?' Fifth game in a row, did we have the energy levels? I look at myself for that, for sure.

"I was more disappointed the way we kept the football, the decisions we made.

"It's a very difficult one [team selection]. I know there is going to be some fatigue and you're playing in a big game.

"Swansea played a back five and three holding midfield players to combat strengths of ours, being more front-foot and aggressive.

"We stuck with the same team, a front four, and it didn't really happen for us. We picked up a couple of injuries and a red card.

"But hindsight is wonderful. We all wish we had a crystal ball.

"That's what I just said to the players, however much I am hurting, the initial response can be one of disappointment and aggression towards the group," he said.

"We weren't good enough today, but I have to remember what the players have achieved over a four-game winning run.

"It doesn't make today right - 'okay we lost to Swansea, let's move on to the next one' - it does matter. I understand that.

"My record as a player and manager in derbies is extremely good and I hate this feeling. I am gutted for the fan base that need some cheer at the minute and we've not given it to them.

"So a huge apology to our Bluebirds at the moment."

Swansea's Steve Cooper: "We focused on two things: how important the game is because it's a massive deal down here and playing the game. We weren't far off our best and we picked a good day to be like that. The performance was right up there because there was so much importance on the game.

"The result is the most important thing, but to think we've done it in the way we've done it is what I want us to be. That's why I wanted to get everybody together on the pitch at the end of the game, to show the togetherness in the group while knowing it's for the supporters as well."