What the managers said...

Cardiff's Neil Harris: "The difference between the teams was quality in the penalty area. You look at their goal and the amount of times we got into really good areas. Did we make the wrong decisions? Probably at times and I think that's probably the difference. That's why Forest are now nine points in front of us, rather than three points. Frustrating evening. 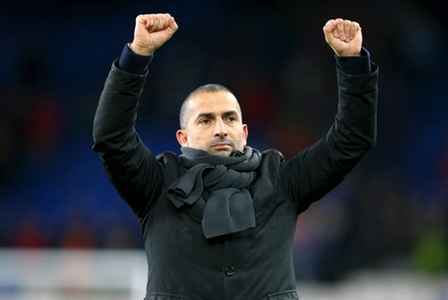 "I've seen the footage from the angles [of the penalty appeal] and he gets nowhere near the ball. If the ball was the wrong side of the player making the attempt, he kicks Josh. The speed he's going at, he's got no option but to go over. It's a penalty."

Nottingham Forest's Sabri Lamouchi: "I'm very satisfied for the performance and the result. We scored, got three points, a clean sheet but to be honest, I think we deserved this victory. We could score one or two more with more quality in the last pass...there were a lot of duels, a lot of long balls but we made the difference and tried to control the game.

"What a game from Lewis Grabban. He worked for the team, he ran a lot and put in a fantastic ball [for the goal]. I'm just surprised about the quality, the spirit. They are not tired; they want to play, they want to fight, to run, to work hard together. Just fantastic."