Cardiff City's Neil Harris: "I feel like I've had my wallet pinched out of my pocket, I've got to be honest! We've dominated everything tonight but with one misplaced pass in the second minute, the ball goes in our goal. We've made chance after chance, dominated possession and, in the first half, some of our football was outstanding. 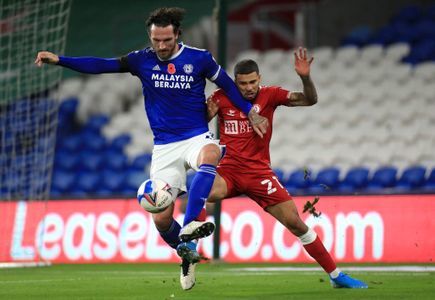 "Bristol City have had one shot within 25 yards of our goal and they've scored. Ultimately, goals win games but it's a hard one to take."

Bristol City's Dean Holden: "People started getting a bit edgy when we were on a little bit of a winless run but we've had two away games on the spin, two wins. It's an incredible team spirit that we've got and you saw that in the game. The goal was real quality - that's how we want to play - and then they were throwing balls in the box with the quality of Wilson, Ralls aiming for target men who are up there with the best in the division.

"We had to be resolute, we had to fight for everything and I'm just so proud of the performance."