Highlights and reaction as City win at Stoke

Stoke's Michael O'Neill: "It is disappointing to lose the game, we had chances to add to the goal we had and didn't take them. Cardiff took heart from the penalty save and we have lost the game because of set-pieces. The manner of the goals we conceded is disappointing. I have not seen them back yet to comment on the marking but they were bigger and more physical than us. 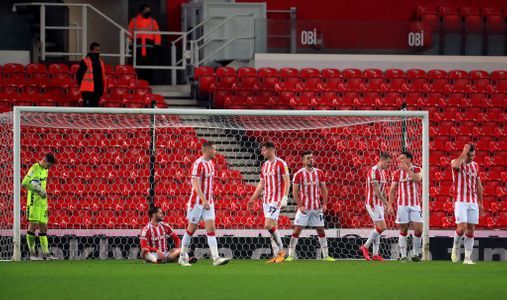 "It was a blow losing Tyrese Campbell. He is a big threat for us and he was our first-choice penalty-taker and would have taken that penalty. We are obviously disappointed to lose, it was a good chance for us to get another win and it's two points dropped for us."

Cardiff's Neil Harris: "It feels great to get the win, I'm delighted for the players. It wasn't for the purist. It was a tough battle between two aggressive sides. The conditions were awful with the wind, rain and cold but credit to my players for digging in and staying in the game.

"The big moments went for us with the penalty save, the game has flipped on that save. Credit the players for having the confidence to come from behind, it was impressive. It wasn't one of Sean's (Morrison) finest games, but he has been fantastic for the club and can be excused those nights. It shows his determination and character to be able to put it behind him and get the winner."