Highlights and reaction from Kenilworth Rd

Graeme Jones: "We set up with the diamond and we out-possessed them, we created more chances than them, we had more shots on target than them, the boys gave absolutely everything they've got. 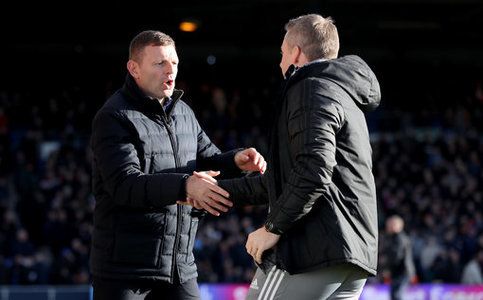 "The game boils down to two moments, where Tomlin, he doesn't hope to score, he makes sure he can score, while we had a really good opportunity with Tunni (Ryan Tunnicliffe), an incredible one on one with Harry, and Collo's header. You have to take them if you're going to win the game and we didn't, that was the difference."

Neil Harris: "It's a huge week, us playing three teams in the lower reaches of the division and we just thought today was a game we had to try and win if we're serious about being in the top six. The game was vital to us to pick some points up. We started the game really well, but were sloppy with the ball, which aused us a few problems on the counter attack and I thought we were lucky not to be behind at half time.

"Second half was so much better, a lot more professional and some real moments of quality as well. It looked like the only thing we were missing today was that end product in the box, but then Lee Tomlin, time and time again since I've been here, has got that moment."