Highlights and reaction from London Rd

Peterborough's Darren Ferguson: "I feel for my players because it feels like a defeat. A night's sleep won't make any difference to that. It's a bad result for us. But at the same time I'm proud of them for a really good performance that fully deserved a victory. It's just shame we couldn't kill Cardiff off as we had a couple of chances to do that at 2-1. I thought we'd seen it through but unfortunately it cost us not taking them. 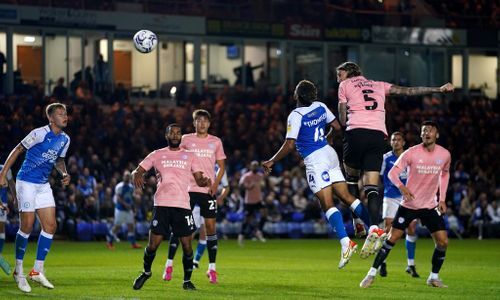 "When you come up against a team like that, who keep putting bigger players on, it becomes hard to stop and they managed to nick the draw. Losing Mark (Beevers) to a hamstring injury is a huge blow and having to take Jonno (Clarke-Harris) off was a big factor because he caused them all sorts of problems. But I'm juggling players who are nowhere near full fitness and I've got others out on top."

Cardiff's Mick McCarthy: "It certainly wasn't the intention to leave it late like that - although it wasn't the intention to start dreadfully in the second half and find ourselves 2-0 down either. I'm disgusted at the manner in which we conceded the two goals and we looked absolutely awful at that point. It was panic stations, but we got ourselves something from nothing really so I have to be delighted.

"Flinty was excellent and we know what he is capable of. We had cross afte cross after cross in the last 10 minutes and you're always going to fancy Aden Sean (Morrison) or Kieffer (Moore) if they can get up early. I thought we showed we had plenty of character when we won 10 games, drew nine and only lost three after I came in last season. We've clearly not lost that despite the first 10 minutes of the second half knocking the stuffing out of us."