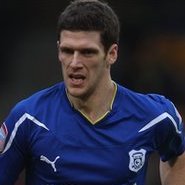 The deal will see Hudson at City until 2014.

He said: “I’m really pleased to have it done.

“My contract was up in the summer and I have been talking to the manager (Malky Mackay) for a long time.

“He came to me quite early and we spoke about it – but I was always going to sign.

“There were only a few little details to iron out, those little details which always have to be finalised, and I’m looking forward to the next three seasons.”

Hudson helped City to keep a clean sheet at Doncaster on Saturday and hopes to see the club get to Wembley and the Premier League.

“My family are really settled here and love it,” he continued.

“Cardiff are an ambitious club and we are heading in the right direction.

“We are going for promotion to the Premier League and, of course, there is still the Carling Cup to play for.

“It would be great to reach the final and then continue our drive towards promotion.

“We’ve put ourselves in a great position with the way we’ve played this season and we feel strong as a group.

“The key is we are in this together and to keep going.”