I'm in charge of team - Solskjaer 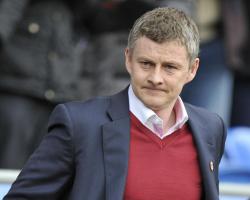 Controversial Malaysian billionaire Tan pulled no punches in a wide-ranging interview with the BBC which fans' groups believe will only serve to further divide opinion on the 62-year-old.

Tan is now keen to have a more hands-on role, although Solskjaer maintains that he chooses the players he believes will strengthen his squad.

"I do football matters, the football decisions are mine," said Solskjaer.

"But Vincent Tan has to be a part of the structure that agrees on transfers - ins and outs - and that it's managed with a budget of x, not x plus y.

"He is very willing to invest and wants us to be successful and wants to know what we do, but it's got to be transparent, structured, and he is involved in that.

"But he doesn't identify players

We have scouts and I decide on who we go for, and then it's about whether we have the resources."

With a clash against Tottenham at White Hart Lane looming on Sunday, Tan's comments - as he criticised fans, the British media and Mackay - have undeniably overshadowed the build up.

Despite that, Solskjaer said: "It doesn't change the focus for the game

He is coming on Sunday to watch, and he will come to see us before it."

Tan believes he should be seen as the hero for saving Cardiff from bankruptcy, rather than being portrayed as "a villain" by the British media he claims have been "a little bit racist and unfair".

Despite the fury over his decision to change the club's colours from blue to red, Tan is adamant he has no qualms, and instead it is the fans who should apologise to him for some of their criticisms.

The Cardiff City Supporters' Trust suggests such comments will "divide the fan base even more than it is already".

But Solskjaer can understand Tan's point as he said: "I see that he's really backing or praising 95 per cent of the supporters.

"My glass is always half full, so that statement he made is very pleasing.

"Of course there are always going to be people criticising what you do, but we wouldn't be in the Premier League without his investments."

Solskjaer can, however, appreciate the fans' outcry over the shirt colour change, but again refused to criticise Tan for his decision.

"Yeah, of course I understand fans' concerns about the shirt change because that's the identity they've been a part of," added the former Manchester United star.

"But that was a decision made before my time.

"Was the shirt change a mistake? You know what mistakes I look at..

maybe picking this player or picking that game plan."