Kieffer Moore is looking unlikely to be fit until the back end of this month. 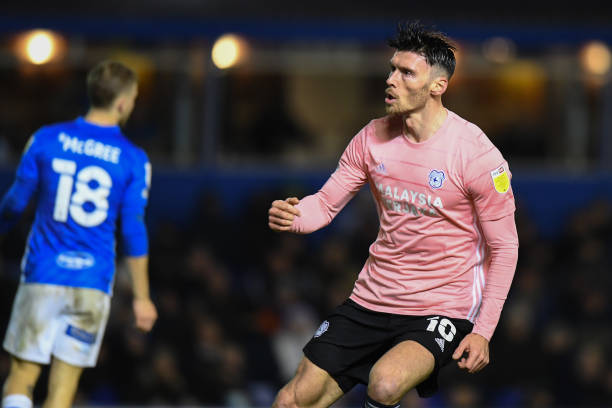 The striker had a scan on an ankle injury he sustained against Bournemouth last week and looks set to miss a decent chunk of January.

To compound the issue, the Wales striker has also contracted coronavirus again, after missing the start of the season following his positive test upon return from the Euros.

Morison said: "He went for his scan and he has got what we thought he had, so it's still the same time frame.

"But he is now off with Covid."

Watters is the other who has been recalled from his successful loan spell.

He netted seven times for MK Dons and will hopefully add some firepower to the Bluebirds' forward line.

However, it looks likely Cardiff fans will have to wait a couple of weeks before they see the young striker in a Cardiff shirt again.

The 22-year-old sustained an injury during MK Dons' game with Sheffield Wednesday on November 23 and has not played since. It was always thought that he would miss this weekend, but now even Blackburn Rovers is a doubt.

Morison said: "Max is still a little bit away. Even Blackburn is going to be a push for Max."

The midfielder has been recalled from his loan spell at Blackpool after a successful first half of the season.

Wintle, however, sustained an injury just before the new year before contracting Covid. He played the full 90 minutes against Hull City on New Year's Day, though, and the club are wary of his fitness levels.

Steve Morison said: "We are just waiting on some international clearance. If we get that, there is a possibility he will be involved.

"But he did have Covid and then he did one day return with Blackpool and played 90 minutes. So we are actually just checking on him to make sure it's the best thing for him this weekend.

"He should be involved."

Sam Bowen is another who has missed a lot of football this season, suffering with a plantar fascia problem.

The foot injury has in fact kept him out since October 20, when he was actually beginning to find his feet in the middle of the park.

However, having missed so much action, Morison heeded caution and patience when it came to the player's potential return. He will need to build up fitness and form with the under-23s before he is in contention again.

Morison said: "He has come back into training.

"He has done three training sessions. He has been off for a long time so he has got a long way to go to be in contention.

"He will have to play some under-23s games and earn his place back in the squad when he is back to the level he was at prior to getting injured."

There is some good news, though, pertaining to Tom Sang.

The utility man has played only three Championship matches this season, the last of which came back in September, and has suffered with a toe, on which he had surgery back in the summer.

But Sang is looking likely to be in contention for this weekend. Quite where Morison will play him remains to be seen, but for him to be back on the pitch again does represent a boost.

Morison said: "He is fit, he just hasn't been in the squads. I've put other people in the squad because of the options on the bench are what I needed.

"He is fit and available for selection on Sunday."

It is going on almost two-and-a-half years since Isaac Vassell last kicked a football in a competitive senior match for Cardiff City.

There have been false dawns along the way with regards to his potential return, so it is understandable that Morison was reticent to nail down a return date.

What he could say, though, is that it is hoped by the end of the month the striker is in a position to resume first-team training with the rest of the squad.

Morison said: "I'm told that he should be in a better place come the end of the month.

"That would be, maybe, just coming into full training with us, rather than being available for match minutes.

"With Vas, as we've seen all along, it's literally just week by week. He is out on the grass today with Max.

"We just ask the question every time we come in, 'How did he get on? Did he get through it?' That's the main thing and then we are on to the next day."