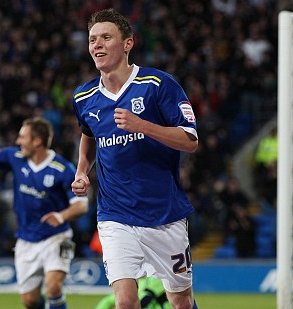 Joe Mason has returned to Cardiff City by mutual agreement.

Mason's loan contract has ended and he is back permanently in South Wales.

Mason scored 10 goals in 27 appearances during his loans at Bolton.

Bolton's website said: 'Bolton Wanderers would like to thank Joe for his contributions during his time at the club and wish him well in his future endeavours.'

The striker is recovering from a hamstring injury and will be looked after by the CCFC medical team.

A statement from the club read: "Cardiff City can confirm that a mutual agreement with Bolton Wanderers has been reached whereby Joe Mason will return to Cardiff City Stadium with immediate effect.

"The agreement sees the cancellation of the striker’s loan spell with the Trotters.

"Joe will now continue his rehabilitation from injury with Cardiff City’s Medical Staff."

A fit Joe Mason would be like a new signing. It surprised many that he was allowed to go out on loan in the first place.