Keenor statue to get November unveiling 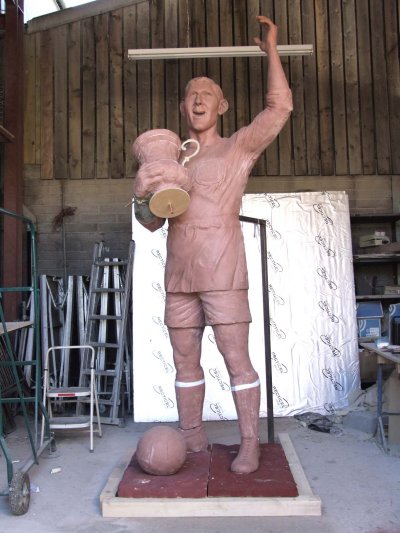 There's never a dull moment supporting the City is there? What a roller coaster this closed season has been for us all and we go into the new season with a very different looking Cardiff City. The return of Craig Bellamy is a real boost for us and shows the club's ambition. Welcome back Bellers! We have also signed some exciting prospects in the shape of Heidar Helguson an Etien Velikonja and come Friday and the visit of Huddersfield to the Cardiff City Stadium, we will all be behind Malky and the boys.

So what has your Trust been doing during the closed season? Our fans survey showed an overwhelming demand for more consultation with supporters on major changes to the club. The Trust was set up to ensure that we the fans have a voice in the way the club is run and although it came after the rebranding and colour change was confirmed, we are glad that the club did canvass fans opinions via their online questionnaire. Yes, there were certain parameters as to what was up for discussion but we were happy to have had some input into the questions themselves. We now look forward to seeing the results of the survey and will be asking the club to make a presentation to Trust members so that we can discuss how we want the club to move forward. We were also pleased to be consulted about the club's new dynamic ticket pricing for the new season which will hopefully fill the last few seats at the stadium.

During the rebranding debate we have been keeping local politicians informed and it is good to see our Assembly Members and MPs, many of whom are Trust members, taking an active interest in the City. We are also pressing for meeting for fans with TG so that we can put our questions to him and hear how he thinks we will fare this season. The club is holding an Annual General Meeting and we will be there as a shareholder to ask about the financial plans for the club's future. Remember that you own a small part of Cardiff City FC through the Trust's shareholding. Shareholders have not had a chance to discuss the rebranding with the club so, in line with the response to our members poll earlier this year, we will also be asking for more information about the crest and home colour change.

It's not just Cardiff Trust members who believe the supporters' voice should be heard at the highest level of football clubs.  The House of Commons Culture, Media and Sport committee is holding a follow up session to its inquiry into football governance. The government and the football authorities response to the committee's first report was pretty weak and the Supporters Direct movement pushed for this inquiry to continue to try to ensure clubs involve democratic supporters' groups in their decision making. We as a Trust submitted evidence to the inquiry using the rebranding of Cardiff without prior consultation with fans, as an illustration of why we need formal supporter representation on the boards of professional football clubs.

Brilliant news on the Fred Keenor statue. Success! You have worked miracles to raise the required £85,000 to have the statue erected and at last we have a date for the unveiling. Saturday 10th of November before the Hull City match is the BIG day, so come early to see this tribute to one of Cardiff's greatest hero being unveiled. The Memorial Garden at the Stadium is near completion with the addition of the engraved granite stone. This will be an emotional focal point for fans to remember loved ones who have passed away. The Trust is glad to have played its part and is now working to get local schoolchildren involved in looking after the Garden.

The Trust was again flying the flag for the City at this summer's Grangetown festival. It was great to meet some lifelong supporters at our stand and we also signed up some new members. We want Cardiff to be a community club and will be redoubling our efforts to give people who have not previously attended a football match the chance to come to support the City this season. If you want to be part of the Trust's community programme or want to help out in any way then email help@ccfctrust.org

It's been a busy couple of months for us and things are only likely to get busier.

Keep the faith. Come on the Bluebirds!