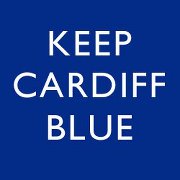 A statement on the Keep cardiff Blue website reads:

We received advice from the local police last night that the club has banned any protest at all from their land and anybody doing so will be moved on.

In the light of this and the previous threats of violence against protesters from prominent supporters of the club's rebrand we feel duty bound to cancel the planned protest scheduled for 6:45pm outside the main entrance to the stadium.