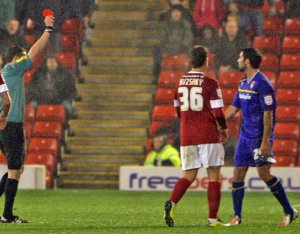 Lappin, a full back, came to City on loan in November and was sent off on his debut at Barnsley (pictured - he's in blue!!). A game Cardiff won 2 - 1.

He only made one other start during his loan at City. That was in the 1 - 0 win at Brimingham.

For Norwich this season Lappin has played a League Cup game (in which he scored) and an FA Cup game. The Canaries won both.

He left Norwich by mutual consent this month. Malky Mackay has given him a contract until the end of the 2013 / 14 season.

"I'm absolutely delighted to be signing for Cardiff City on a permanent deal and pleased that we've now finalised everything," he told Cardiff City Player.

"I'm looking forward to the rest of the season now and hopefully we can continue the good form we've been showing the past couple of months.

"I thoroughly enjoyed my loan spell here with a great squad of lads. The manager, staff and everyone at the club have been fantastic with me and when I heard they wanted me back here on a permanent deal it was an easy decision to return."

He becomes City's third signing after Fraizer Campbell and the youngster from North Wales, Rhys Healey.