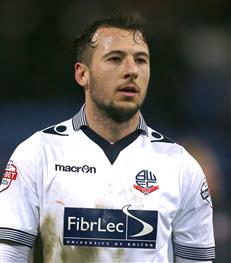 Adam Le Fondre got two for Bolton, one in each of their drawn games. Matthew Connolly missed out through injury yesterday but scored a tap-in for Watford on Wednesday, a reward for continuing his run from the back into the Forest box. David Tutonda scored his first goal in senior football, a beauty too, in Newport's home defeat to Dagenham & Redbridge while Etien Velikonja curled a free kick into the Cercle Brugge net for Lierse in a 2-0 win which gives them the edge in their relegation play-off. Josh Yorwerth scored for the Ipswich DVP team in a 3-0 win at Bristol City.

Oddly, Declan John, Rhys Healey and Kenwyne Jones all came on with their sides 1-0 down yesterday but finished up with draws. Bittersweet though for Colchester and Bournemouth who conceded last minute equalisers. It's out of Colchester's hands now at the bottom of League 1 but Bournemouth just need two wins to go up.

Ross County won 3-0 in the week but no game for them and Filip Kiss this weekend. Joe Lewis is out with injury, Ben Nugent still out of the picture at Yeovil and Javi Guerra didn't make it off the bench for Malaga at Real Madrid. Tommy O'Sullivan had his loan at Port Vale extended to the end of the season although I'm not quite sure why, he failed to get on again this week. KTC started, as always, for St Etienne as they drew 2-2 at new leaders Lyon.

Deji Oshilaja had an interesting approach to rehabilitation after being carried off with a neck injury suffered in a headlong fall last Saturday. He played the 90 minutes in both of AFC Wimbledon's draws this week. He's under 6 foot tall but Deji is a tank, a collision with Akinfenwa in training would be seismic.

Among our ex-players, it was a good weekend for the class of 2012. There were goals for Rudi Gestede, Mark Hudson, Jon Parkin, Kevin Sainte-Luce and Haris Vuckic while Tom Heaton saved a penalty.