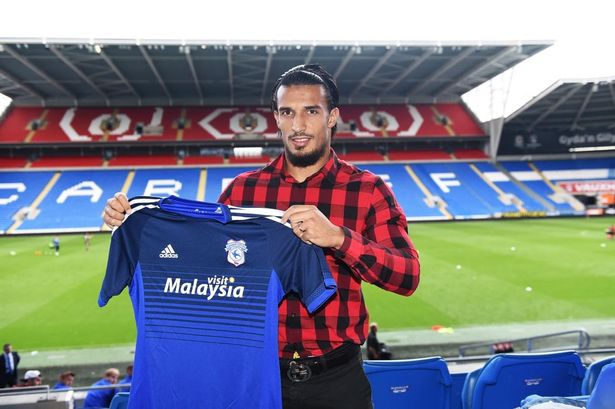 The latest goal celebrations of Idriss Saadi have left us a bit baffled here at Loan Watch. Two weeks in a row he has scored, run to a bag behind the goal and pulled out an Incredible Hulk mask which he has then put on to celebrate his goal. Surely, as a Cardiff City player in Belgium, an Etien Velikonja mask would be more appropriate? No excuse really, he can order one from the Loan Watch gift shop and it'll be with him in a couple of days. I'd happily throw in a couple of extra items too, we're having a bit of a clear out at the minute. Maybe he'd be interested in a Filip Kiss 2016 calendar, a Tommy O'Sullivan onesie, a set of Elvis Menayese golf club covers or a Frederico Macheda Action Man figure? He only has to ask.

We'll start our round-up with Idriss. Another superb goal, from long range this week, takes him to 14 for the season. He missed another chance soon after which proved costly as Sporting Charleroi equalised late on for a 1-1 draw. He was involved in controversy after the game as a Charleroi fan called him a 'dirty Arab' and a 'dirty terrorist' which, rightly, incensed him. An interview with him this week seems to indicate that he's open minded about his future here, he's just concentrating on Kortrijk for now and trying to force his way into the Algerian national team, having recently switched his allegiance from France. He was in their preliminary squad for the African Cup of Nations but missed the final cut.

A goal for Emyr Huws yesterday in Ipswich's 1-1 draw with Brentford. Not a great performance from Ipswich and Emyr is starting to show signs of some wear and tear from playing regular football again after so little action here. Manager Mick McCarthy continues to be impressed though and has asked Emyr if he wants to stay next season. "He said he'd love to join, which is good. He said he's loving it. He's enjoying playing again. I think everyone is enjoying having him here. I certainly am and I think the fans are too."

Another defeat for Rotherham but another quality performance from Semi Ajayi in a 2-0 defeat to Villa. Tom Adeyemi wasn't at his best but didn't hide and tried to get forward when possible. Another frustrating day for Adam le Fondre as Bolton drew 1-1 with AFC Wimbledon in League 1. He started but failed to make an impression. Having scored in the week, Stuart O'Keefe spent yesterday's game on the bench for MK Dons as they lost to a late goal at Neil Harris's Millwall. Deji Oshilaja missed Gillingham's win at Bury through injury.

It's rare for both keepers to come out in credit from a 3-3 draw but Ben Wilson and Simon Moore seem to have done that as Rochdale drew with Sheffield United. On saying that, Wilson was partly responsible for United's first as he picked up a back pass and a goal resulted from the free kick. A good day for second placed Plymouth in League 2 as they beat third placed Carlisle 2-0. Nothing spectacular from Matty Kennedy but an effective and hard-working 90 minutes from him which is encouraging in itself. He asked after the game if anyone had some spare legs he could borrow.

In the non leagues, Lloyd Humphries played for Weston-Super-Mare as they beat Oxford City 3-0. An unlucky defeat for Cinderford as a controversial sending off meant they played the last hour with ten men. City loanee Jarrad Welch said they were robbed as they went down 1-0, Chesham's goal was a penalty scored by Darren Purse. Yes, that one. It's a small world (but, as Stephen Wright correctly pointed out, you wouldn't want to paint it).

Apart from Purse there were also goals in the non-leagues for former players Danny Johnson, as Gateshead push for a play-off place in the National League, and two more for Jon Parkin as York battle to avoid relegation. Cameron Jerome scored again for Norwich and there were also goals for three of our Premier League squad as Magnus Wolff Eikrem, Wilfried Zaha and Andreas Cornelius all netted. We must have had some team back then.