Tommy O'Sullivan made history last week by being the first player to score two goals in an under-21 international while at Port Vale. That's his gravestone sorted then. It was a genuinely impressive performance from him, the second goal was a stunning strike. Unfortunately he picked up a knock so missed Port Vale's game on Friday, a home defeat by Colchester for whom Rhys Healey made a late appearance. Healey's time at Colchester has been more of a hokey cokey than a loan spell, hopefully he can stay injury free and administrative error free for the rest of season and score the goals to help Colchester stay up.

No action for Ben Nugent or Danny Johnson but Deji Oshilaja and David Tutonda both played the 90 minutes in 2-2 draws for their clubs. Declan John's Barnsley lost a crunch derby with John Brayford's Sheffield United but remain in contention for a play-off place.

In the Championship, Kenwyne Jones (pictured) scored with a late header on his debut for Bournemouth in a 1-1 draw with Ipswich. Matt Connolly came on late for Watford in another 2-2 draw while Adam Le Fondre and Joe Lewis came up against each other as Bolton and Blackpool drew 1-1. 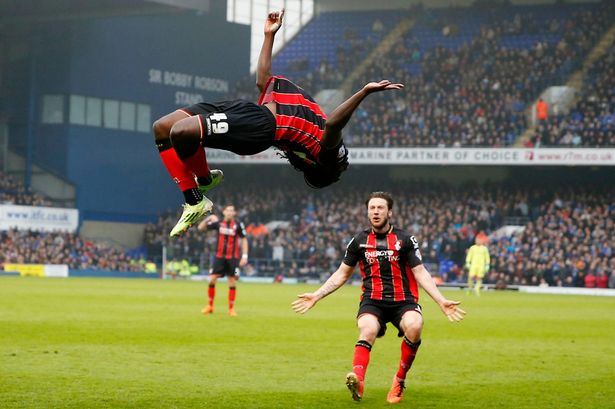 Filip Kiss helped Ross County to another win in Scotland. Having got a successful run of games under his belt he must be disappointed to have missed out on Slovakia's squad in the week, especially as they've won all 5 qualifying games so far and are set to make the finals. Javi Guerra returned from injury as he came on in injury time for Malaga in a 1-1 draw. KTC's St Etienne had an impressive 1-1 draw at Monaco while Etien Velikonja scored a nice opening goal (below) for Lierse SK as they won a relegation play-off game 3-2 against Cercle Bruges.

A quick word about Kevin Sainte-Luce. He came through our Academy and made one first team appearance for us before leaving, very much under a cloud, in January 2013. He failed to make it at AFC Wimbledon but has now had a run of games at Conference club Gateshead and scored his first goals for them yesterday in a 2-2 draw at title chasing Grimsby.