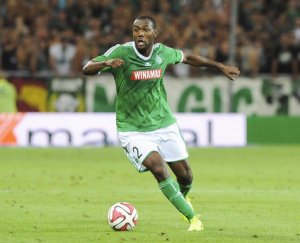 April 12th 2014 saw our last win in the Premiership, a 1-0 win at Southampton. It seems a long time ago already and I've a hunch there won't be another one along any time soon so it may be worth remembering the team for when it comes up as a quiz question. The players are spread far and wide now; Marshall, Theophile-Catherine (pictured), Fabio (all Cardiff), Medel (Inter Milan), Caulker (QPR), Cala (Granada), Whittingham (Cardiff), Daehli (Freiburg), Kim (Wigan), Mutch, Campbell (both Crystal Palace).

Only one of those players is currently on loan, KTC. He played for St Etienne today in a 1-0 win against Nantes. Javi Guerra started for Malaga in the week but only came on as a late sub yesterday in a 2-2 draw with Athletico Madrid. Etien Velikonja started for Lierse in a 1-0 defeat while Filip Kiss will hope to start for Ross County tomorrow night at St Mirren as they look to continue their good run of 7 wins and a draw in their last 8 games.

In the Championship, Matt Connolly played for Watford in a 2-0 win at Millwall and Adam Le Fondre scored for Bolton in a loss to Norwich. Kenwyne Jones came on late for Bournemouth in their win at Brighton while Joe Lewis missed Blackpool's game at Ipswich after an injury in the week.

In League 1, Declan John played in midfield for Barnsley having impressed in defence previously but a 1-1 draw virtually ends their play-off hopes. Rhys Healey came on for Colchester but couldn't save them from a 1-0 defeat at Coventry. Tommy O'Sullivan was unlucky to miss out for Port Vale after impressing in the week on his first start.

Danny Johnson is back from his loan at Stevenage while David Tutonda was benched by Newport so Deji Oshilaja was the last man standing in League 2 until he got stretchered off. A nasty fall on his head but he's expected to be ok. AFC Wimbledon now have their highest points tally as a league club and Deji has played his part in that.

Not sure if Josh Yorwerth's time at Ipswich counts as a loan or a trial but he played in their DVP's team win in the week. It would be a shame to lose him but the club does have other youngsters coming through in that position.

Of our ex-players, Jon Parkin scored a stunning goal for Forest Green (below) to take his league total to 23 from 43 games, Guido Burgstaller scored his second of the week for Nurnberg in Germany while two of our subs from that Southampton game, Eikrem and Berget, played for Malmo in a 1-0 away win.