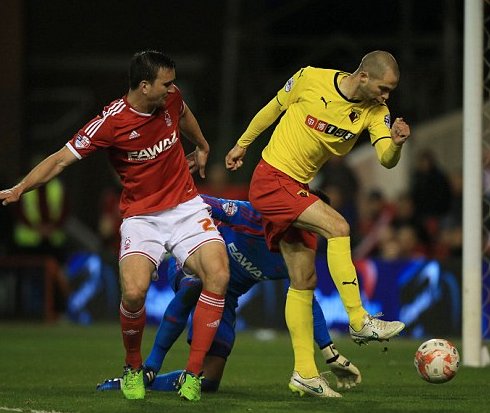 It may seem that he's gatecrashing this one as he's only made five appearances for them but he's yet to concede a goal and scored in the win at Forest so he deserves his invite. Bournemouth can join Watford with a win against Bolton on Monday night. It's probably the first time Kenwyne Jones and Adam Le Fondre have met since escaping here so I imagine it's going to be like the scene in Shawshank when Red and Andy meet on Zihuatenejo beach. We'll see.

In League 1, Declan John played in defence for Barnsley after a spell in midfield. A 1-0 defeat but you'd need a hard heart to begrudge Bradford a win yesterday. Rhys Healey didn't get on for Colchester but a 3-2 away win gives them a chance of escaping the drop. Tommy O'Sullivan got four minutes at the end of Port Vale's win at Yeovil. They're safe now so maybe Tommy will be trusted with five minutes next week.

Deji Oshilaja played in AFC Wimbledon's 2-0 defeat at Bury while David Tutonda scored for the second week running as Newport won 2-0 at York. He enjoyed his goal too. He wears his heart on his sleeve when he plays, I'm sure he'll be a fans' favourite if he makes the grade here.

Filip Kiss played 77 minutes in a rare defeat for Ross County, Javi Guerra played the last ten minutes in Malaga's 1-1 draw, KTC's St Etienne moved to within two points of third place and a Champions League spot with a 1-0 win while Etien Velikonja scored a penalty in a 3-1 win for Lierse which takes them through the first stage of their fight against relegation.

Of our former players, Ronnie Moore takes pride of place after leading Hartlepool to safety in League 2 having been ten points adrift at one stage. An incredible escape but one Shawshank analogy is enough for today. Jon Parkin's Forest Green made the Conference play-offs but Luke Coulson's Oxford City just missed out in the Conference North. Goals abroad for Jo Inge Berget and Guido Burgstaller while Rudy Gestede and Ross McCormack scored again to take their totals for the season to 22 and 19 respectively.