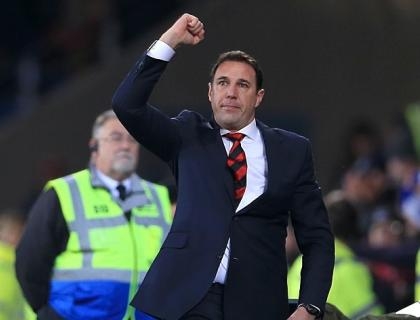 Football Association chairman Greg Dyke has made it his priority to increase the number of English players featuring in a domestic top flight which has increasingly come to be dominated by signings from the continent and further afield.

But Mackay is proud of the number of English players included in his Bluebirds squad - there are 14 in total - whose 2-2 draw with Manchester United on Sunday followed on from other impressive results against Manchester City and Swansea earlier in the campaign.

There were six English players in the Cardiff starting line-up against United, the joint-second highest of the weekend's fixtures, and Mackay was particularly pleased with the players who made up the spine of his side.

Mackay said: "Ben Turner and Caulker at the back were sublime.

"You look at Fraizer Campbell, Peter Whittingham, Caulker and Turner, there is young English talent there playing at Premier League level.

"And if they play consistently well, that's when the net that is cast wide to find English talent in the Premier League may glance down on them at some point."

The draw against United again highlighted the standard of the job Mackay is doing at Cardiff, despite the loss of his head of recruitment Iain Moody, who has since joined Crystal Palace, and what is understood to be a difficult relationship with owner Vincent Tan.

And he was quick to dismiss any suggestion that United and boss David Moyes had paid the price for taking his side lightly.

"David Moyes does not underestimate anyone and Manchester United would have known coming down here they would have a tough game on their hands, I have no doubt about that," he said.

"We knew we were playing the champions and they knew they were playing a team who are committed and have shown evidence we can compete at this level.

"Our first-half performance was arguably our most complete performance of the season so far in the way we played, and the belief we had to play like that against the champions."

Moyes, meanwhile, praised his fellow Scot, and believes the Bluebirds have every chance of retaining their top-flight status.

"Being in the Premier League has excited people round here," he said. "They have got a good spirit going. They have had some big home games early in the season and they have used them well.

"It will be a long season, but Malky has done a good job with them and I think they have a good chance."

But Moyes was frustrated to see United miss out on a chance to climb into the top four.

"We have been on a pretty good run, but this is a blow because you can't keep dropping points in games given where we are," he said.