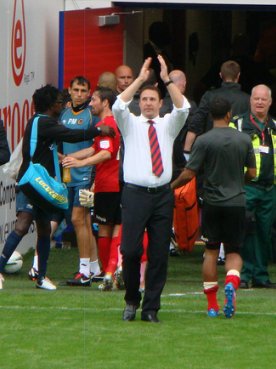 "His (Peter Whittingham's) overall game from central midfield is why I think he could play in the Premier League," Malky Mackay said.

"It pleases me that we have turned down two aggressive bids from Premier League clubs.

"But he knows where this club wants to go and he is keen to play his part in that and I'm delighted he has signed an extended contract.

"Whitts could be even better if he wants to be. He can still improve.

"He has added more to his game than when he was a luxury player when I was planning teams to play against him."

But Malky did not just focus on his match winner. He was pleased with all his players.

"We signed 10 new players in the transfer window and it takes time for them all to integrate. Some of them only met a few days before the match against Wolves," Mackay said.

"They are beginning to get to know each other, how we play and the nuances of each others games. I am delighted with the players we have brought in and the way things are progressing.

"I looked back at our bench from last season when we had kids among the substitutes and it was sometimes difficult to make a change when a player was flagging.

"Against Wolves I was able, for instance, to take Jordon Mutch off and put on Aron Gunnarsson, the captain of Iceland.

"Of the new players Tommy Smith did not give the ball away once in the match. He made the correct decisions every time.

"Craig Noone gets spectators off their seats with his ability, while Nicky Maynard is a player I didn't think we would be able to sign. But we now have him and he did well. When he is match fit we will see far more of those bending runs he makes.

"Wolves went ahead from what was a magnificent free-kick. I have watched it again on video and it was a terrific strike. The ball went over the top of our wall and dipped. But we didn't panic and were back in the game pretty quickly at 1-1.

"I was delighted Peter Whittingham scored a hat-trick, but it was his overall performance and leadership which really impressed me. He scored three excellent goals, but the second was sublime.

"We have around six players away on international duty over the next couple of weeks, while Craig Bellamy and Ben Turner will be fit for the next match, against Leeds at home on Saturday week. They both have short term injuries, while Rudy Gestede and Stephen McPhail are making good progress.

"We are hopeful all four will be fit after the international break."

"We talked long and hard about not conceding stupid free-kicks or penalties and we made stupid errors at important times in the game," Solbakken said.

"We were 1-0 up and we didn't give ourselves the chance to hold onto our lead.

"I'm very disappointed at our stupid mistakes which cost us goals.

"Everyone can beat everyone in this division but we've lost quality players in the transfer window.

Our new players will take time to bed into the side."